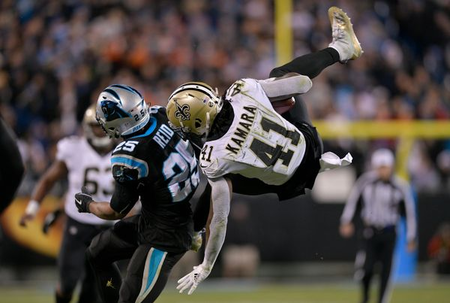 When the New Orleans Saints played the Carolina Panthers in Week 15, there was a moment when right tackle Ryan Ramczyk worried about running back Alvin Kamara.

Kamara had just finished a run on the right side by trying to hurdle Eric Reid. The Panthers safety wasn’t fooled, so he stood his ground and hit Kamara with his shoulder, which made the running back’s body twist in midair before he fell about 5 feet.

“I was on that side running behind him like, ‘Oh, no!’” Ramczyk said.

“But, he’s like a rubber band. He just snaps back up and he’s able to go, but it’s a little scary seeing some of those.”

Kamara was barely on the ground after that hard fall. His knee touched the grass, and he popped right back up and returned to the huddle.

This has become commonplace for the Saints’ dynamic superstar. Because of the way Kamara contorts his body, he frequently leaves himself open to dangerous hits or high falls, but after just about all of them, he hops up and moves on to the next play. ...