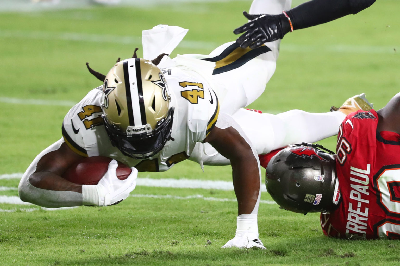 The New Orleans Saints play the Atlanta Falcons on Sunday in New Orleans. The Saints will be without star quarterback Drew Brees, who suffered multiple rib injuries, and a punctured lung. But they can rest easy knowing Alvin Kamara is still ready to go, continuing his fantastic form.

Kamara has been fantastic this season. He’s covered 486 yards on 104 rushing attempts across 9 games this season.

For the Saints, the question of starting quarterback is a looming one. NFL Analysts James Palmer gave his preview for the game. He talked about who can be expected to start as quarterback for the saints.

“On Sunday in New Orleans, all eyes, rightfully so, will be on a quarterback Taysom Hill, who reportedly will start for Drew Brees.

“Even though head coach Sean Payton has not made any announcement about who his starting quarterback will be against the Falcons.”

However, Palmer suggested that they will have plenty of attacking options, none more important than Kamara. “But whoever the quarterback is, they have a plethora of talent around them.