“He used a razor and he used to slice it so thin that it would liquefy in the pan with just a little oil. It was a very good system.” (1 Viewer)

Offline
Sticky Post
In Goodfellas , Paulie used this method for their nightly meals: “He was in a year for contempt and he had this wonderful system for doing the garlic. He used a razor and he used to slice it so thin that it would liquefy in the pan with just a little oil. It was a very good system.”


... I’m not much of a cook myself, but i do come from an Italian-American family, and i dont recall this method being used.. Anyone ever try it? 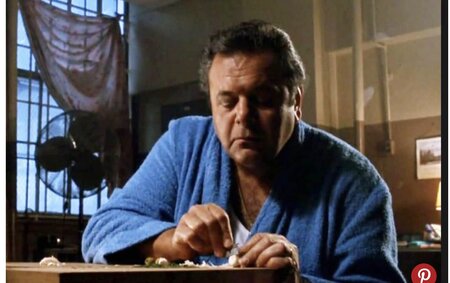 Is this your way of telling us you were at the strip club?

CapitalCitySaint said:
Is this your way of telling us you were at the strip club?
Click to expand...

Nah. Years ago my friend and roommate was a bouncer at one and since I was his ride I was there constantly. Was friends with most of them (and dropped a lot of money)

Just kind of made them not a big deal to me

See? I don’t even know the difference.

Torgo said:
I've never tried this, nor have I tried to sell coke or bury the body of Billy Batts.

Now, let me go get my shine-box.
Click to expand...

Offline
I'm not a masochist with peppers (well, maybe one pepper).

But I do miss the little heat Jalapenos had.

superchuck500 said:
I’ve tried it. Paulie’s better with a knife than I am.
Click to expand...

CapitalCitySaint said:
Is this your way of telling us you were at the strip club?
Click to expand...

It’s subtle, but maybe one of the better jokes on the EE in awhile

Someone sent me this today.

guidomerkinsrules said:
It’s subtle, but maybe one of the better jokes on the EE in awhile
Click to expand...

I'm thinking Tommy or Paulie for you.

I mean you are both.

Dago said:
It is a lot of work

My wife gets irritated at crawfish boils because I love to eat the garlic cloves and she cant stand the smell
Click to expand...

That's my favorite part. If I go to a boil and they don't have any garlic in it, I up-end the table and run away.

Marty_Graw said:
Very True. Got me into a bit of trouble at work once. We were working a trade show in San Francisco and myself + 3 colleagues decided to go eat at The Stinking Rose. Every dish was super heavy on the garlic; even desert was garlic ice cream.

Next morning, we were in the booth on the show floor and between the garlic stink sweating out of our pores (guess we had a lot to drink at dinner as well) and us all being incredibly "gassy" we were reprimanded by the booth captain and each got a call from HR. Luckily, we were all veterans and got off with just a "don't do that ever again" speech.

Three years later, the show returned to San Fran and in the pre-show memo for booth workers, it was specifically stated that no one was to dine at The Stinking Rose, or they would be sent home at their own expense. Good Times!
Click to expand...

It's because San Francisco has a huge vampire problem.

Offline
This Kuhn Rikon is a very well built , easy to use, and easy to clean, and can can be used on unpeeled cloves...a little pricey but it'll last a lifetime

Marty_Graw said:
If you are used to Habanero peppers, then Jalapeños will likely seem mild to you. For something just a little hotter, try using Serrano (8k - 22k on the scale) or DeArbol peppers. 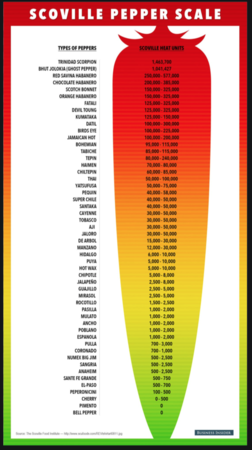