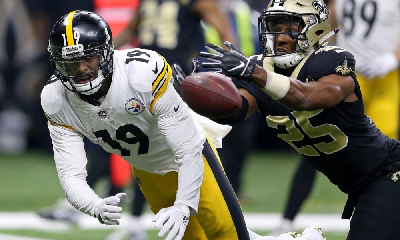 The New Orleans Saints receiving corps is suddenly looking very sketchy. Starters Michael Thomas and Emmanuel Sanders are both out of action, and they’ve lost veteran reserve Bennie Fowler to injured reserve. They need some help, and it’s likely to come from the practice squad, where they’ve stashed veterans Austin Carr and Tommylee Lewis, plus rookie Juwan Johnson.

But who could be available in a trade? Know now that the Saints aren’t likely to find a magical cure-all before the NFL cutoff date, but some marginal upgrades could be found here or there. And a potential move shouldn’t be made based off a knee-jerk reaction to this week’s absences; the Saints have been running thin at receiver for some time now. With those caveats in place, here are 15 possible names that could be on the move before Nov. 3’s deadline.

A Saints-Falcons trade for Julio Jones won’t happen for several reasons, besides the whole NFC South rivals-til-death thing. The Falcons can’t afford to eat the dead money hit from trading Jones, and the Saints can’t afford to take on more of his salary to help facilitate it. But wouldn’t it be fun?

Thursday at 9:03 PM
Dan in Lafayette

Yesterday at 6:33 AM
Andrus