Offline
Help me with all the trades we had?

Online
So I'm on the clock then?
OP

treeduck said:
So I'm on the clock then?
Click to expand...

Unless you made a trade at that pick.
OP

Offline
How about this no time slots tonight and people just pick whenever and we will go back on time slots in the morning.

Stew said:
Unless you made a trade at that pick.
Click to expand...

No, no trade here, I'll just do a little research before I pick.

Offline
Definitely no slots since tonight should have ended with the end of last round. We r in good pace. We should let the people have a chance to get a draft board and hopefully they send it in in case they can't show tomorrow

Stew said:
How about this no time slots tonight and people just pick whenever and we will go back on time slots in the morning.
Click to expand...

That sound fair since we ahead of schedule

Online
The Jaguars pick is in.

Online
With the 1st pick of the 4th Round The Jacksonville Jaguars select Ryan Nassib, QB, Syracuse 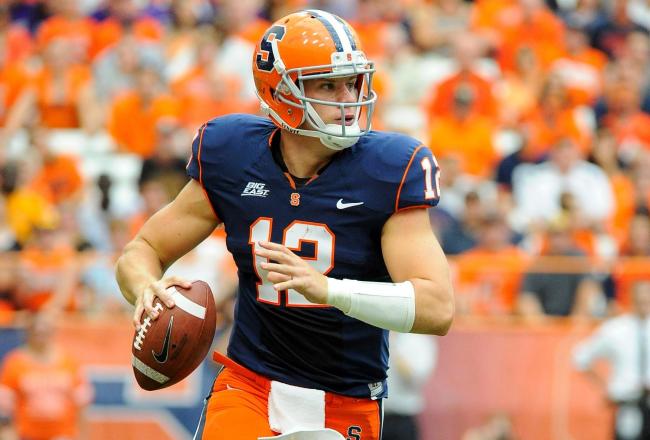 OVERVIEW
Only two quarterbacks from Syracuse have been drafted since 1945, but with a consistent senior season, Nassib will be the third (and first since Donovan McNabb in 1999). Entering his third year as the starting quarterback for the Orange offense, he will contend for most of the school's career passing records in 2012.

Nassib flew under the radar as a two-star high school recruit out of Pennsylvania, redshirting in 2008 and serving as the back-up behind Ex-basketball player Greg Paulus in 2009. He inherited the starting quarterback duties in 2010 as a sophomore, throwing for 2,334 yards, 19 touchdowns and eight interceptions.

Nassib had his best season last year as a junior, finishing with 2,685 passing yards, 62.4 completion percentage and a TD-INT ratio of 22-9.

Nassib has good-enough arm strength to make throws at all levels of the field with the mechanics and beautiful ball fakes that scouts love to see. Nassib tends to make poor reads under pressure and force throws, but is a smart player and does a nice job using his eyes to hold defenders and work through his progressions. He isn't a statue in the pocket and is very accurate throwing on the run, flashing impressive toughness for the position. Nassib is a gamer with a live arm and the potential to rise up draft boards with a consistent senior year, ranking as one of the more underrated players for the 2013 NFL Draft.

We at Jaguars front office don't much like the 2013 class of quarterbacks, but we know we're needy in that position and so we had a plan in place for each round. In the 4th round we didn't expect Ryan to be there, so we're very happy to declare our best case quarterback scenario in this draft has come to pass.

Offline
Darn, I tried to sneak it in before you posted. That was a no brainer. Dude has first round potential.

nextyear said:
Darn, I tried to sneak it in before you posted. That was a no brainer. Dude has first round potential.
Click to expand...

Yeah I was waiting things out, see how far I could get, but I couldn't wait any longer. I was sure someone would pick him in the 3rd round.