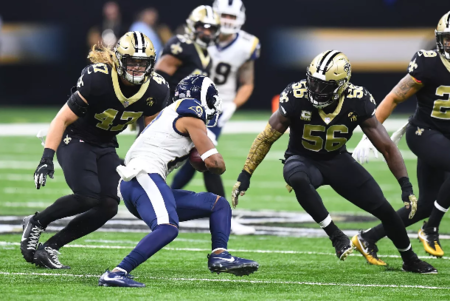 Can this much-improved unit in 2018 take the next step into dominance for the 2019 Saints?

The New Orleans Saints had arguably the worst linebacker play in the league from 2012-2016. Too often, coaches and fans would see a Saints linebacker beaten badly down the field or to the edge, or woefully out of position, often creating big plays for the opposition. Opposing tight ends and running backs would run amok through the New Orleans defense, with the linebacking corps often helpless to slow them down. Coach Sean Payton made a difficult personal decision after the 2016 season, moving on from longtime friend and linebackers coach Joe Vitt and replacing him with experienced defensive guru Mike Nolan. The difference in the play of the unit as a whole was immediately noticeable. The Saints linebackers, while still not a dynamic group, played much better football in 2017. Last season, the position took another big step, being arguably the most improved unit on the entire team. New Orleans benefited last year from one of the league's most underrated free-agent signings, as well as a return from injury by a highly regarded draft pick from the previous year. With training camp just a couple of days away from the official start, we preview the Saints most improved unit from a year ago.