Jacoby Stevens has announced that he will remain.

Still waiting to hear from CEH, Thad Moss, Saddiq Charles, Glenn Logan. After losing Joe Burrow, the most difficult person to replace will be Cushenberry, IMO. There is no true center on the roster or this recruiting class right now. They either need to hit the portal, JUCO and/or sign Sedrick Van Pran.

I guess they figure it won't get better than this next season, so their stock is the highest it will be?

Offline
Surprised with Queen being on the list but he had a game of games in the NCG. I think he is a great prospect but not sure the scouts are as high on him as I am.
OP
OP

bclemms said:
Surprised with Queen being on the list but he had a game of games in the NCG. I think he is a great prospect but not sure the scouts are as high on him as I am.
Click to expand...

They will be when he runs like Debo. I don't think he has the same instincts, but I wouldn't mind the Saints taking him in the mid-rounds. He's the kind of athletic, sideline-to-sideline LBer that can stay healthy a full season. He should definitely stay because he could make a huge jump in draft status with another year leading LSUs defense, but you can be made for a guy wanting to be paid.
OP
OP

I guess they figure it won't get better than this next season, so their stock is the highest it will be?
Click to expand...

I mean most of them have little to gain by staying outside of Queen.
OP
OP 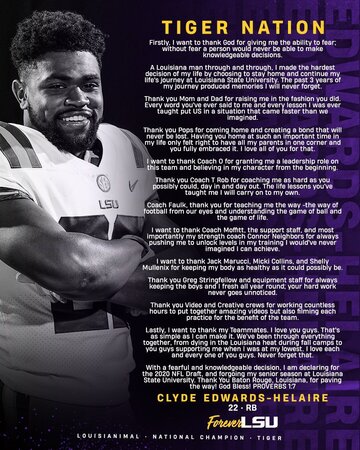 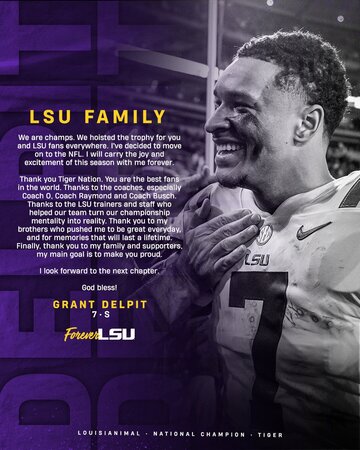 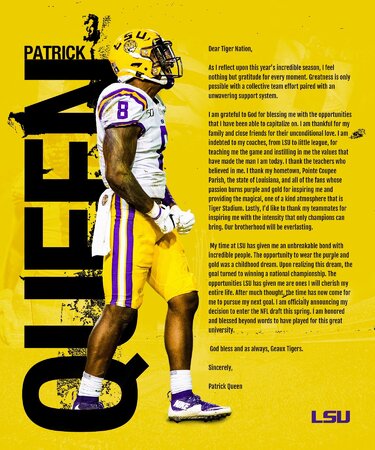 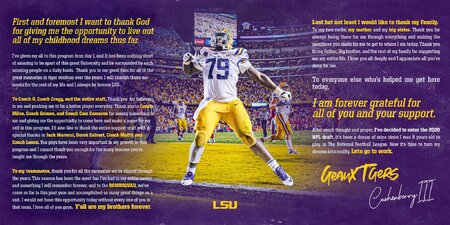 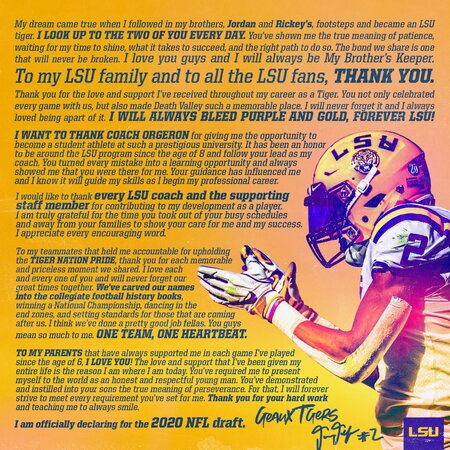 Offline
Well, I guess we know where Frank is going now...

Offline
And Saddiq is gone...

Offline
Also, Dave Aranda has been mentioned for the Baylor and Hawaii jobs.

Offline
The 3 D-Line are staying.
I think Queen and Phillips are making a mistake. I also think Charles should have returned to prove he can stay healthy for a year.

MLU said:
Also, Dave Aranda has been mentioned for the Baylor and Hawaii jobs.
Click to expand...

No way Aranda takes the Hawaii job but Baylor is a nice stepping stone place. I'm not sure he wants to be a college HC though. I think his calling card is ultimately in the NFL. That would be the biggest loss of everyone so hopefully he stays.

Offline
I was just thinking yesterday morning how dominant we could be on the defensive side of the ball next year. I firmly believe Chaisson adds another 25lbs and looks like Chase Young next season. The dline and secondaries should be absurdly good. Queen was about to have a Devin White kind of year and Phillips is the perfect piece next to him. It will be tough to replace those two. Two silver linings at LB. It is one of those positions where a lot of really good college players and experience exists without a big drop off. Really need to find one in the portal or Juco that can come in. The second is Aranda is creative and can mix up defenses and move an extra safety or corner in against teams running the spread (which we will see a lot of) and the dline is plenty stout to handle the run without a lot of help. It will make the games against Florida, Bama and Auburn more difficult and when we play UGA in SEC championship it will test the LBs.
Show hidden low quality content