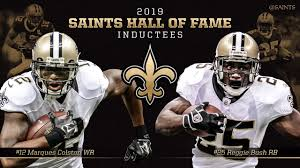 Mark Romig Opening Statement:
"Good morning everyone! I'm Mark Romig, board member of the Saints Hall of Fame and stadium announcer for the Saints. Thank you for being here for today's press conference to introduce the New Orleans Saints Hall of Fame Class of 2020. Founded in 1987, the New Orleans Saints Hall of Fame recognizes former players, administrators and individuals who have played a significant role both on-the-field and off-the-field in the franchise's history. The Class of 2020, will be honored on the weekend of a home game during the regular season to be announced. The New Orleans Saints Hall of Fame inductees are selected by a media selection committee with the assistance of an advisory committee, consisting of previously inducted Saints Hall of Famers. This year's class of 2020 is strong, made up of two players, who were drafted by the team in the 2006 draft class that helped form a foundation that led to a Super Bowl victory. Both of these players were selected to multiple Pro Bowls and in addition to their excellence on the field, also represented the organization with class off the field and in the community. I'd like to introduce guard Jahri Evans and safety Roman Harper. In addition to Jahri and Roman, we would like to also introduce the Joe Gemelli "Fleur De Lis" award recipient. This honor is presented to a person who has contributed to the betterment of the New Orleans Saints and supported the franchise. Congratulations to longtime Spanish language radio play-by-play announcer Marco Garcia. At this time, I'd like to welcome Saints Owner Gayle Benson to the podium to introduce for a few remarks prior to Coach Payton's introduction of Jahri Evans and Roman Harper."

Mrs. Benson:
"Thank you Mark. Thank you everyone and good morning. Once again, I would like to briefly thank everybody again for participating in this press conference today. Like many other obstacles in life, we will hopefully be through this soon and I look forward for all these faces to be together in a room next time. When our football team had a new beginning in 2006, starting with the hiring of coach (Sean) Payton, that first draft class that he and Mickey (Loomis) selected really served as the backbone to establishing the culture that our organization has to this day. Both Jahri Evans and Roman Harper had long, outstanding careers as members of the New Orleans Saints. They played an important role in establishing that culture, that allowed us to have quick success as we built and won a Super Bowl that made my late husband Tom (Benson) so proud.14 years after they were drafted though, what makes me just as proud as the football players that they developed into, was also the men, husbands and fathers that they developed into off the field and what they are today. ...