Offline
Edit: I'm aware Smith went back to school. Not editing it out though.

I'm ready for the Senior Bowl and beyond already. I'll be spending most of my Sundays watching videos on players who catch my eye.

Easy targets are guys like DeVonta Smith from Alabama. Great speed. Catches everything. And is a big play waiting to happen. Would do well opposite Michael Thomas.


Another guy on defense I'm learning more about is Hamsah Nasirildeen. 6'4", 216lbs. Sideline to sideline speed with hips almost like a corner. Imagine Obi Melifonwu but with actual instincts and a much harder hitter. It's like this guy was hand crafted for me to fall in love with as a player. Only flaw is he's coming off an injury, but that might be exactly what allows him to slide to the 2nd or 3rd day. I can see him lining up all over the place to cause trouble for offenses. He's not even a head hunter. He gets low and explodes through the ball carrier. Forced a few fumbles at Florida State. 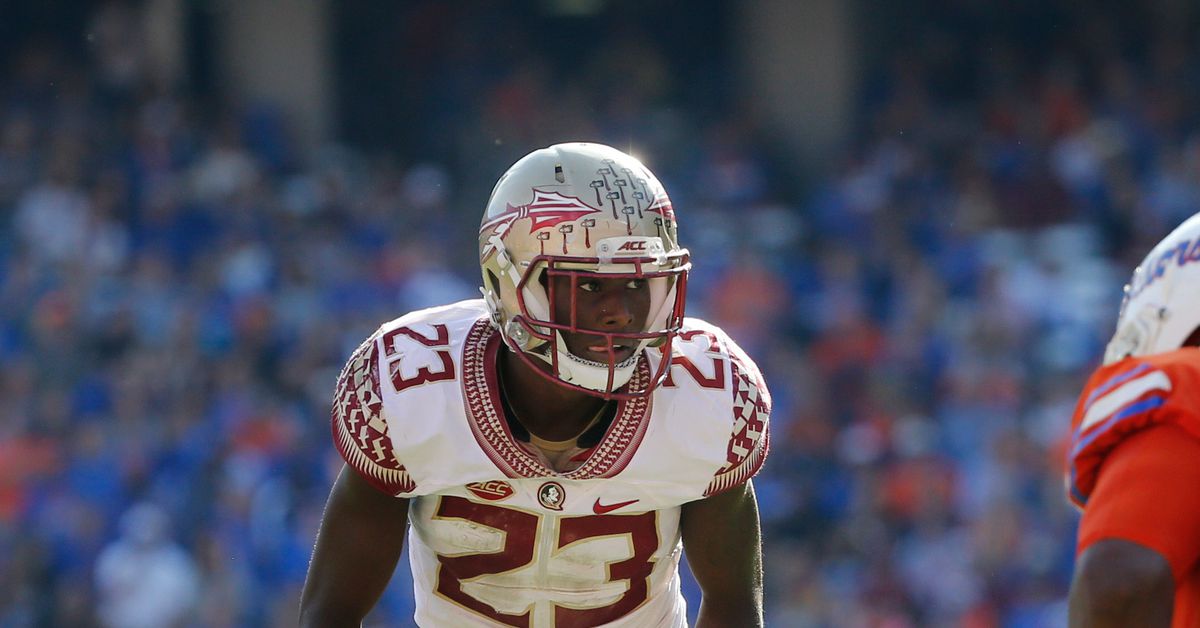 Hamsah Nasirildeen is one of the draft’s most polarizing players. And he might be just the weapon the Raiders need to match up with the AFC West’s top tight ends


Who is everyone else keeping a close eye on as we transition to the offseason?
Last edited: Jan 24, 2020

Online
Thought Devonta is returning to school?
Henry Ruggs is entering the draft

Offline
Gotta start thinking about which Ohio State player we will draft.

Online
Maybe not in the 1st round... or even in the draft of a FA can be targeted... but the Saints need to add a legitimate speed pass-rusher to the defense... a player that can turn the corner on the edge and get quick pressure on the QB to move him off of his spot. It’s something that the defensive front is missing.
OP
OP

So he is. That’s annoying. Literally did it yesterday.

Eman5805 said:
So he is. That’s annoying. Literally did it yesterday.
Click to expand...

Yeah I was hoping he would enter, but there some good WR prospects in this draft.

Offline
I don't know to much about Nasirildeen either. He was hurt during Florida game. It didn't look good. 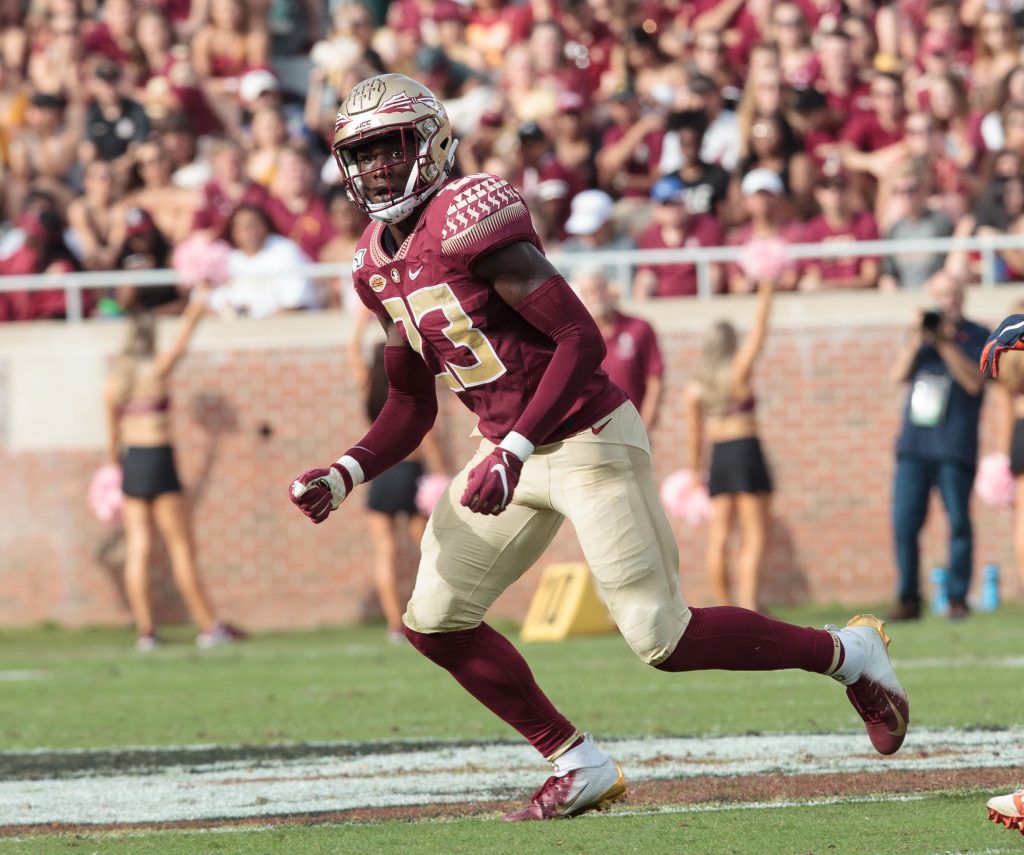 Once again, another Florida State defender is lost for the season. A source tells NoleGameday that Seminoles star safety Hamsah Nasirildeen has suffered a torn ACL after going down in the second quarter against Florida. Nasirildeen was carted off against the Gators with an air cast on his left... Offline
As you can tell, I am not an LSU guy. So with no bias at all, I am infatuated with Justin Jefferson from LSU. Great feet off the snap, good breaks in and out of routes from the slot, a natural box out frame, and can win over the top down the field. I think there’s higher upside WRs in the class that can push him into the 20s, but Jefferson fits perfectly with what the Saints need right now. Think Cooper Kupp. Ideal pick right now with the Saints needing a capable #2.

Outside of Justin Jefferson, among the players I love at pick 24:

Austin Jackson, OL USC: I think Jackson is going to be what Andrus Peat was drafted to be. He is a plug and play at the LG position, with the strength and athleticism to be a quality run-grater as a rookie. Pass blocking has got some raw elements and a lot of it has to do with his feet and eyes. He was exposed a bit against AJ Epenesa (who I would grade as a top 10 overall player in this class), but a lot of his issues appear correctable due to his athletic profile and could be masked early on by starting him at guard. Jackson will only be 20 years old on draft day and has the developmental ceiling to excel in both the run/pass games, and he could eventually be a quality LT. Armstead/Jackson/McCoy would be by far the most athletic side of any OL in the league.

Shaq Quarterman, LB Miami: I haven’t seen him in round 1 speculation in most people’s eyes right now, but expect his stock to go up in the coming months. Expect him to test well athletically and his pursuit is phenomenal. Four year starter and the leader for what was a very strong defense for the majority of his tenure. Watching him a handful of times the last few years, the guy flies to the ball and is always around the play. I’ll have to watch more to try and figure out why talking heads don’t love the guy. He looks like a plus athlete, is capable in coverage, gets to the QB when tasked, and is a fantastic run defender. 46.5 tackles for a loss in his career.

Justin Madubuike, DT Texas A&M: Though not considered among the biggest needs for NO, we got to see how damaging losing Davenport and Rankins when it mattered most. Madubuike is a strong leverage player and extremely versatile. You will see plays when he wins with his bend off the end, but his best utility is pushing the pocket inside. He has a large build, with natural power and long arms to push the pocket. Technique needs sharpening but that’s generally the case when a guy is winning without it. Think Nick Fairley without the early conditioning questions.

Jeff Gladney, CB TCU: One of my biggest problems with the Saints secondary is that there’s a lack of speed beyond Lattimore (hopefully Jenkins is resigned). With many teams along the NFL utilizing vertical threats opposite their #1 WR, the Saints could use another boundary corner that’s capable of running with anyone. Gladney’s defining trait is obviously that he might be the fastest man in the class, but he’s also a great mirror defender. He does a great job matching route with the WR and has closing speed to make up for any missteps. With Lattimore usually shadowing a number 1, Gladney would be the perfect fix to the Saints’ tendency to get beat downfield.

Offline
Holy shoot ^ I love those takes and prospects, Ironically I was just researching, reading some scouting reports on most of those prospects just recently; and they all make a lot of sense for the Saints.

Heres a pretty basic, but good introductory video going over some of the top of this year's WR class. (Just ignore Devonta Smith as he decided to go back to school)


So here's an early cloud of names I've seen associated with the Saints (24 pick range) in some way shape, or form throughout various Draft sites, fan / user create Mock drafts, and articles.


Starting to get more and more excited about the Draft with each day.

It may not be the most prolific college football program in terms of churning out NFL prospects, but Lenoir-Rhyne certainly has one eligible for the 2020 NFL draft class. Kyle Dugger has all the ph…