216 tackles by our Safeties this past season (1 Viewer)

Offline
Among other teams in our division, here is the "tackles" total among Safeties on their respective roster. I included the Colts and Titans below because those 2 teams in addition to Tampa Bay rank in the top 5 in the league in YPG given up and each run a 4-3 defense.

Looking at this, at first glance I thought, that every position on our team had elevated tackle numbers because we spend so much time on defense and therefore as a team we would have higher tackle numbers.

However I looked up the stats on NFL.com and I was able to see "tackle" totals for each of the aforementioned teams.

What we see is the exact opposite, the Saints actually have the fewest tackles ranked among the teams mentioned that also run a 4-3 defense.

Further, here is how it ranks in regards of "percentage of team tackles made by the safety position"

5 of the 6 teams are seperated by a mere 1.6%. This is probably the league norm. But the Saints are way way furthur down the list.

Maybe is the whole scheme of the 4-3 that allows our safeties to make so much more tackles, maybe we have them in run support more. Even so, what does that say about our LB'er core that we have to put our safties in the box so frequently.

Im trying to figure out what all this really means. And I wonder, if we had better linebackers could our safties spend more brain energy on the passing game. Maybe we do have playmakers back their in the passing game but spend to much time in run support.

Think about it, how many times have our safties biten on playaction? I think we know where there mind is at.

Offline
This is becacuse we have no MLB

Offline
A few things that must be noted. Tackles are not an official stat; each team records the stat differently. Some count the first guy, some count all the guys, some count the last guy that makes the defining stop, some give partial tackles, some dont. Either way the stat is very subjective and relative depending on which side you are looking. Tackles should not be used as a measuring stick between teams or defenses. The only accuracy you see in the statistic is a players progression on a particular team if the same guy is doing the recording each season. Even then it can be misleading. Is a sack a tackle for a loss, a quaterback pressure, a quaterback knockdown, and a sack all at the same time? These parameters are not regulated league wide, therefore, as said before, tackles are not an official stat.

The other point is, some 4-3 teams, like the Colts, play their safety (Bob Sanders) up close to the line of scrimmage and give him free reign to do whatever. Other teams use their safeties as safties who rarely come into the box until after the play is diagnosed. At times we brought our safeties up, but due to the man to man coverages we run, most of the time they were in the back end. Weak play on defensive line and at LB contributed to our high percentage of tackles made by our safeties. Even though the stats aren't official, it would be nice to see what % of tackles were made by the defensive line, the LBs and the DBs, what percent came on passing plays, came on running plays, and what percent came at a loss, a 0-5 yd gain, a 5-10 yd gain, and a 10+yd gain. This would give a more accurate breakdown of how our defense and safties played, although I can tell you from the games and memory that they were decent in runsupport, brilliant at times during the blitz, and downright horrible in pass coverage.

Offline
What would be interesting to know is what percentage of those tackles were from running plays vs. passing plays. I am not sure their is anyway to figure that out without going back and analogizing all of the plays that a safety made a play.

crogers1224 said:
This is becacuse we have no MLB
Click to expand... 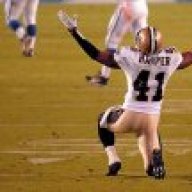 Offline
Roman Harper spends a lot of time in opposing teams backfields. he's good at that. however, when your safeties have that many tackles, it really says a lot about the LBs and D-line.
Show hidden low quality content