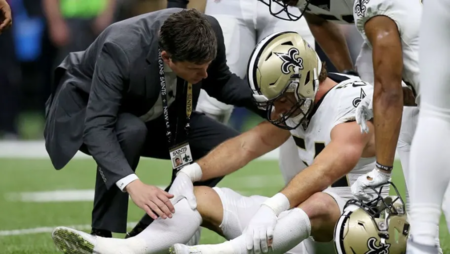 Another year, another heartbreaking and gut-wrenching playoff exit for the New Orleans Saints. Emerging as the biggest threat to the San Francisco 49ers in the NFC, the Saints dropped the ball big time, losing to the sixth-seeded Minnesota Vikings in the Wild Card Round. Now, they face huge decisions ahead of the new calendar year. Here are three that stick out.

3. Can the Saints Convince Kiko Alonso to Take a Pay Cut?

The Saints, noticing their championship window closing (and the Miami Dolphins' tank commencing), acquired linebacker Kiko Alonso to bolster their defense. Alonso played in 13 games, and tallied a total of 20 tackles. The linebacker's season ended the same time as New Orleans' but it was due to suffering a torn ACL against the Vikings, the third time he's done so dating back to college. Now, the Saints have to convince Alonso to take a pay cut. If not, they'd likely release him.

Who makes the cut? A pre-training camp 53-man roster projection