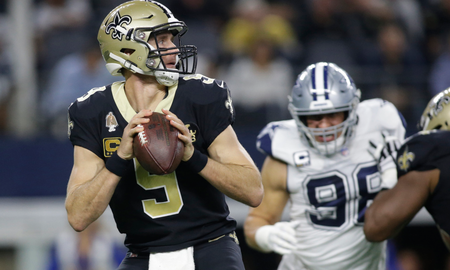 The New Orleans Saints have the awkward position of sitting idle on Saturday, Jan. 12 as the first of two divisional round games are played in the NFC side of the 2018 NFL playoffs. They’ll be watching like the rest of us as the Dallas Cowboys travel to play the Los Angeles Rams, waiting to see which team will advance in the bracket. If the Saints take care of their own business against the Philadelphia Eagles on Jan. 13, they will host the winner of this Rams-Cowboys tilt within the comforts of the Mercedes-Benz Superdome.

And the Saints should be pulling for a Cowboys upset. Here’s why.

1. The Cowboys are the weaker team

Dallas has quickly built a reputation – helped by their upset of the Saints in Week 13 – for a team that wins off of its strong defense and elite running game. Those narratives fall apart after going under scrutiny. The Cowboys rank 19th in team efficiency ratings over at Football Outsiders, with the 21st-ranked offense and 10th-ranked defense. An offense built around Ezekiel Elliott masking Dak Prescott’s deficiencies as a passer isn’t sustainable, and their defense is too suspect on the back end. They’re by far the weakest of the remaining playoff teams. The Saints are built to take down teams like Dallas – shutting down the running attack and getting opportunistic in pass defense, then launching an overwhelming attack on offense. There’s no more-vulnerable opponent for New Orleans to see left in the playoff picture....