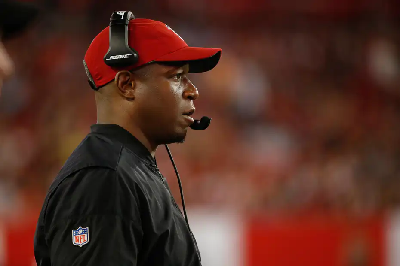 The New Orleans Saints (3-2) enter their bye week in Week 6 of the NFL season. While the Saints did not play this past weekend, the other three teams representing the NFC SOUTH were in action. The Falcons, Panthers, and Buccaneers all battled NFC NORTH foes Sunday afternoon.

Below are three things to watch in the NFC SOUTH in Week 6 while the Saints take their BYE Week.

Following a disappointing 0-5 start to the 2020 NFL season, the Atlanta Falcons parted with Head Coach Dan Quinn and General Manager Thomas Dimitroff. The Falcons announced Monday that Defensive Coordinator Raheem Morris would take over the coaching duties as the Falcons' interim head coach. Morris is no stranger to coaching in the NFC SOUTH, serving as the Tampa Bay Buccaneers Head Coach from 2009-2011.

The 0-5 start to 2020 is the worst start in quarterback Matt Ryan's career and for the Falcons, their worst overall start since 1997. Sunday, against the Vikings, the Falcons provided their best game of the season. The league's 31st ranked defense forced QB Kirk Cousins to throw three INTs in the first half, setting up Matt Ryan's offense into short field situations where they capitalized. Ryan threw for 371 yards and 4 TDs and connected with WR Julio Jones 8 times for 137 yards and 2 touchdowns.