3 Takeaways From Saints Loss to the Packers (1 Viewer) 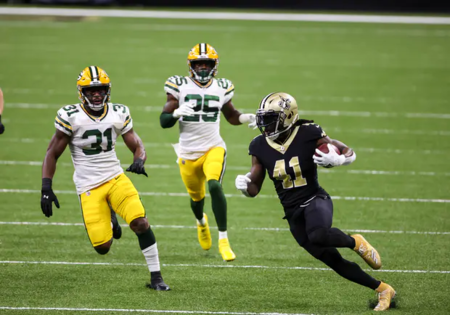 BREES HAS TRUST ISSUES WITH HIS RECEIVERS

The Saints were without Michael Thomas for the second consecutive week, and without the NFL’s single-season leader in receptions, the Saints passing offense again leaned heavily on Alvin Kamara. No. 41 led the Saints with 14 targets making 13 receptions against the Packers. However, Kamara’s monster was not enough to pull off the victory.

Brees, though efficient, did not look like he wanted to “turn it loose” when under pressure and instead dropped off a pass to the 2017 AP Offensive Rookie of the Year. Drew acknowledged in the press conference that Sean Payton called a few “shot” plays throughout the game, but the Packers secondary and pass rush did not allow Brees enough time to launch one downfield to Smith, Harris, and Sanders. Watching the film on Monday may tell a different story, but from first glance, Drew is not comfortable with his receivers without Michael Thomas in the lineup. ...