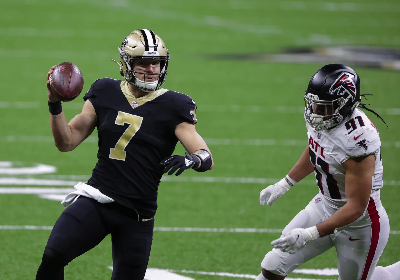 The New Orleans Saints (8-2) won 24-9 over the Atlanta Falcons (3-7) inside the Mercedes-Benz Superdome Sunday afternoon. In the victory, QB Taysom Hill earned his first career start and led the Saints to their seventh consecutive victory. Below are three takeaways from New Orleans' victory over their NFC South rivals.

Taysom Time in the Second Half

Taysom Hill's first NFL start went according to plan, pushing past the Falcons at home, thanks to a stellar second half. The BYU product had not started a competitive game at QB since 2016, his Senior year at Brigham Young, and did not disappoint in his first NFL start with New Orleans.

The Saints' offense started slowly in the NFC South matchup, committing a three and out on their opening drive and failing to find the end zone until late in the second quarter. However, in the second half, it appeared Taysom Hill had calmed his nerves and led the Saints to two scoring drives, each capped off by a touchdown run by the Swiss Army Knife.