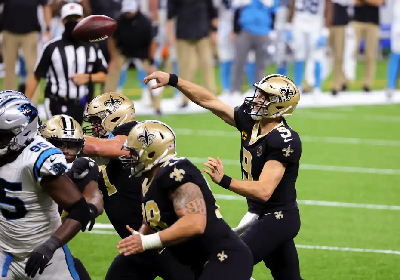 The New Orleans Saints (4-2) defeated the Carolina Panthers (3-4) by the score of 27-24 in front of 3,000 fans inside the Mercedes-Benz Superdome on Sunday. The victory is New Orleans' third consecutive win and their second over an NFC SOUTH opponent this season. The Saints now sit a half-game behind the Tampa Bay Buccaneers, who defeated the Raiders Sunday afternoon, for first place in the NFC SOUTH.

Below are three takeaways from the Saints Week 7 victory over the Panthers...

NO THOMAS? NO SANDERS? NO PROBLEM!

Brees threw for 287 yards and 2 TDs en route to become the first player in NFL history to complete 7,000 passes. The Saints' offense has begun humming again after a slow start to the season. New Orleans entered the week averaging over 30 points per game and were right on average scoring 27 on Sunday.