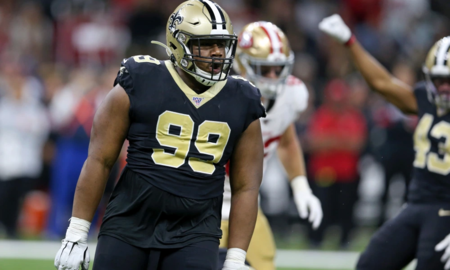 It almost feels like an understatement to say the New Orleans Saints will field a different team in 2020 than the one they finished last season with. They have seven or eight different starting jobs up for grabs with two dozen free agents headed for the market. There’s going to be change all across the roster, but some of those changes will manifest in players breaking out and raising expectations for themselves after a year in the Saints’ system. Here are four breakout candidates to watch as the offseason unfolds.
Shy Tuttle

Tuttle is the projected starter at defensive tackle next to standout nose tackle Malcom Brown; incumbent co-starters David Onyemata (pending free agent) and Sheldon Rankins (rehabbing another lower-leg injury) are unlikely to both return in 2020. While Tuttle’s biggest moment was his stiff-arm of Matt Ryan on Thanksgiving, he was a legitimate player throughout the year who deserves more snaps. It’ll be fascinating to see what he does with more than 23 snaps per game. ...