5 players who helped their cause in preseason opener (1 Viewer) 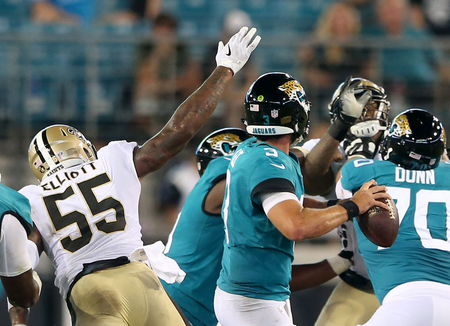 Five players who helped their cause in the New Orleans Saints’ 24-20 victory against the Jacksonville Jaguars on Thursday night at TIAA Bank Field:

The veteran outside linebacker had himself a game with four tackles, 2.5 sacks and two forced fumbles. And the 6-3, 255-pound Elliott did all this damage in only 16 snaps. His strip sack of Tanner Lee led to a fumble recovery by Taylor Stallworth and set up the Saints’ go-ahead touchdown, a 4-yard touchdown run by Jonathan Williams. It should be noted that Elliot was doing most of his work against the Jaguars’ third- and fourth-teamers, but his ability to rush the passer might be the redeeming characteristic that earns him a roster in a deep linebacker unit. ...