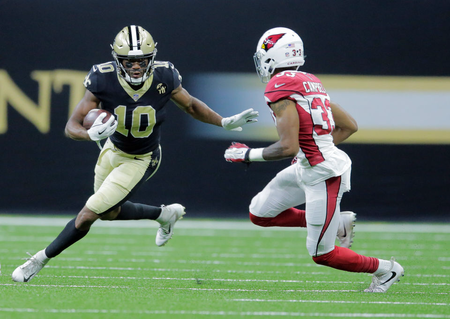 With Cameron Jordan, Alex Okafor and Marcus Davenport sidelined, the second-year end earned the start and continued is strong preseason performance. He had a tackle for loss, a quarterback hit and two pressures in 25 productive snaps. Hendrickson plays with passion and physicality despite being relatively undersized at 604, 270 pounds. He blew up a block by tight end Ricky Seals-Jones to thwart an early third-and-2 run by David Johnson. Hendrickson makes plays with a non-stop motor and did so Friday against the Cardinals front-line players.

It’s becoming apparent that the third-year back from Arkansas has a solid hold on the No. 3 spot behind Alvin Kamara and Mark Ingram. Williams reeled off a nice 19-yard run between the tackles against the Cardinals’ first-team defense, showing excellent vision and balance. On the play, he juked safety Tre Boston in the open field to pick up an extra 7 yards. He averaged a solid 4.6 yards on 8 carries and led all Saints running backs in rushing for the second consecutive game. At this point, Wiliams appears to have a clear lead over veterans Shane Vereen and Terrance West for the No. 3 tailback job. ...