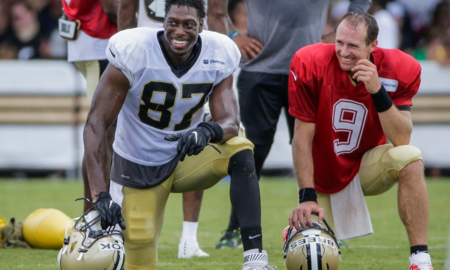 The New Orleans Saints have Wednesday off from training camp, and they’ll return to work tomorrow with wide receiver Michael Thomas in tow. His absence has allowed the Saints to try new things with additions like Jared Cook and test their young receivers in fresh roles, and some players have really benefited from that. Other guys have taken advantage of the opportunities at their own position groups with starters sidelined by injuries. Here’s six Saints players who have gained momentum through the first week of training camp:

It’s unrealistic to expect Brown to pick up where Sheldon Rankins left off. They’re two very different talents with unique body types and skills sets. But the Saints have to have liked what they’ve seen out of Brown as a pressure player on the inside, winning his battles in one-on-one drills and pushing the pocket in team sessions. He won’t provide the same pressure rates as Rankins, but there’s a real chance Brown is more than a two-down player.