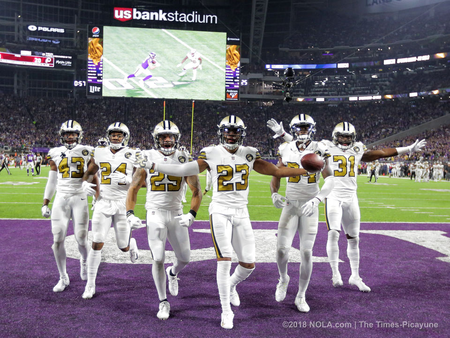 By Jeff Duncan - NOLA.com | The Times-Picayune

Here are my takeaways from the win:

1. The game changed before halftime

The Saints enjoyed a huge momentum swing right before halftime. With Minnesota leading 13-10 and driving for another score, Alex Anzalone and P.J. Williams sandwiched Vikings receiver Adam Thielen after a short pass play and dislodged the ball at the Saints' 14-yard line.

Marshon Lattimore scooped up the loose ball and returned it 54 yards to the Vikings' 33. An unsportsmanlike conduct penalty on LaQuan Treadwell gave the Saints the ball at the 18, and two plays later Alvin Kamara scored from the 1.

The potential 14-point turnaround stunned the Vikings crowd and sent the Saints to halftime with an improbable 17-13 lead....