A Week Later, a Blown Call Is Still Topic A (1 Viewer) 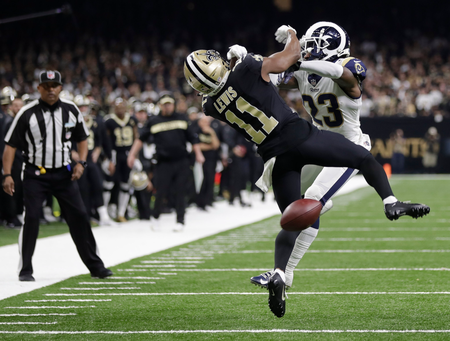 Nickell Robey-Coleman of the Rams was not penalized for this defending of Tommylee Lewis, infuriating Saints fans.CreditCreditGerald Herbert/Associated Press

ATLANTA — At N.F.L. media nights, the biggest stars speak at podiums, and this year was no different. When the Los Angeles Rams took the floor, quarterback Jared Goff, running back Todd Gurley II and Coach Sean McVay drew big crowds.

But cornerback Nickell Robey-Coleman drew equally large crowds. A week ago, Robey-Coleman was a former undrafted free agent finishing his sixth season. Now, he needed media minders to keep reporters from digging too deeply into a play that may have altered the Super Bowl.

That came in the N.F.C. Championship Game in New Orleans, where he drilled Saints wide receiver Tommylee Lewis before he could get in position to catch a pass from Drew Brees.

No flag was thrown for pass interference or helmet-to-helmet contact. The Saints went on to kick a field goal, but left enough time on the clock for the Rams to tie the game and send it into overtime, when they eventually won, 26-23. ...