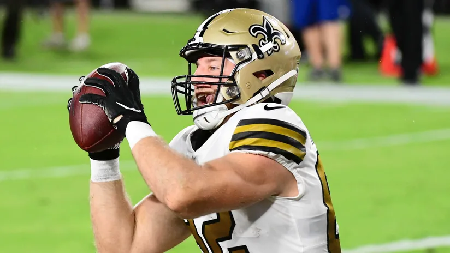 Adam Trautman wants to be the leader of his group, and there's reason to believe he can.

True, he only is entering his second season at tight end for the New Orleans Saints and, true, he had to play catch-up as a rookie last year because there was very little offseason contact with teammates until they gathered for training camp.

But veterans Josh Hill and Jared Cook were released this offseason, Trautman has more Saints game experience than any other listed tight end on the roster – Taysom Hill is a quarterback – and he got a feel for all that is required of him in those 15 games, with six starts.

"I guess the best way to put it is the opportunity is there, to take control of it," said Trautman, the Saints' third-round pick in 2020. "But you've got to be able to do it. There's no given, there's no 'not earned' in this league.

"I've never been given anything like that in my life, anyway. I kind of pride myself on, you get what you earn. That's kind of my mentality. I work to have an expanded role in this offense and to be able to help us win games, so all offseason just studying other guys, even film from last year from our own guys like a Cook or a Josh, just to be able to fill those roles and to be able to do it all. Because I think that's my role.