After a year out of football, Jayrone Elliott impressed in his Saints debut (1 Viewer) 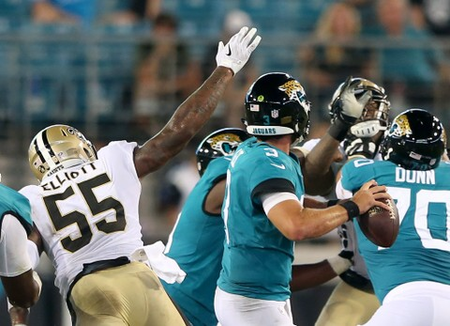 Train hard for a few days, take a rest day, get back on the field, get on a plane and repeat.

The routine did not change much for Jayrone Elliott after the Dallas Cowboys released him in September last year. He stayed on schedule and in shape while his agent worked the phones. Every week from the time he got cut through the end of the playoffs, Elliott would work out, rest and jet somewhere for another tryout with an NFL team.

He estimated that he worked out for 20 teams last season -- including the New Orleans Saints after defensive end Alex Okafor was lost for the season. The call he was hoping for never came, but Elliott kept faith.

"It was real humbling, but at the same time I trusted the process," Elliott said. "I was always waiting on the next opportunity." ...