Ahead of Saints vs. Rams, how Sean Payton and Sean McVay influence, steal plays from one another (1 Viewer) 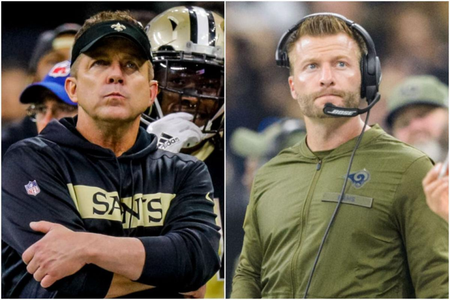 Keith Kirkwood can thank the Rams for providing his first NFL highlight.

The rookie was still on the practice squad when New Orleans played Los Angeles but was called up a couple of weeks later when the Saints played the Bengals. During the third quarter of that game, he made his longest reception of the season. It wasn’t the first catch of his career, but it is the one he will remember most about his debut.

The design of the 42-yard reception was immaculate. A go route up the left sideline and a deep crossing route to the same side occupied two cornerbacks and a safety, clearing things out for Kirkwood. The rookie wide receiver ran a shallow crossing route and then took off up the right hashes. The play put Kirkwood on a linebacker, who never stood a chance. If not for a pass that was a little underthrown, Kirkwood would have scored.

If something about the play looked familiar, a few weeks earlier, the play carried out almost identically when Rams wide receiver Cooper Kupp used it to score a 70-yard touchdown against the Minnesota Vikings. Los Angeles coach Sean McVay did an excellent job of drawing it up, and New Orleans did a solid job of lifting it. ...