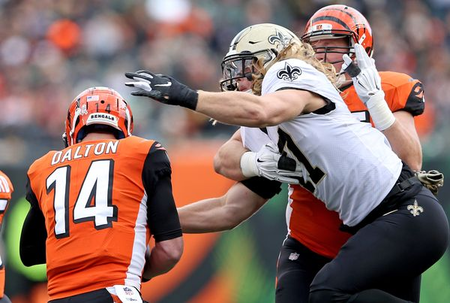 The routine last season consisted of injury rehabilitation, weightlifting during practice and position meetings. The routine lately has been to make impact plays for the New Orleans Saints to run their winning streak to eight games.

Second-year linebacker Alex Anzelone in the last three games forced a fumble, intercepted a pass for the first time in his career and recorded a sack for the first time this season. The first two plays were crucial to a pair of Saints wins, and the third one was gravy on top of a 51-14 thumping of the Cincinnati Bengals.

Anzalone typically plays between 30 and 45 percent of the team snaps on defense, so his chances to make impact plays are somewhat more limited, yet the Florida product selected in the third round of the Saints' loaded 2017 NFL Draft class has found ways to do it.

“I just want to do my part,” he said during a Monday (Nov. 12) teleconference with reporters. “The coaches did a good job putting us in position to make plays. I think the defense is executing the plays, being in the right spot at the right time.” ...