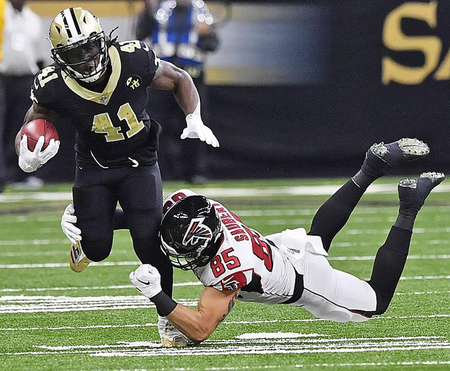 By Nathan Brown | The Advocate

With the Atlanta Falcons well aware of the New Orleans’ potent aerial attack entering Thursday’s Thanksgiving matchup, Alvin Kamara punched them in the mouth from the start.

The second-year tailback had taken a backseat the previous two weeks as Mark Ingram proved the home run hitter in the Saints backfield, tearing for runs of 33 yards (against the Bengals) and 38 yards (against the Eagles). But even without a touchdown in the Saints’ 31-17 victory over the Falcons, Kamara proved pivotal to keep the New Orleans offensive attack potent and varied.

The Saints’ dose of lighting in the backfield dashed for 89 yards, the most since Ingram returned to the lineup after a four-game suspension to start the 2018 season, on 14 carries. His longest, an 18-yard run off the right guard to begin Thursday’s blowout, set the tone. Two plays later, Kamara gained 9 yards, leading to Drew Brees’ first of four touchdown passes. ...