Alvin Kamara on saying the Saints would have beat Eagles in playoffs: 'Yeah, that's what I said' (1 Viewer) 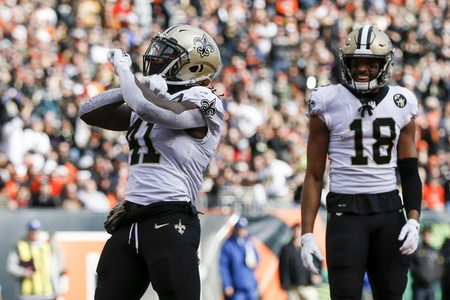 Alvin Kamara is convinced the Saints would have beat the Eagles in the playoffs last season.

The Saints running back didn’t mean any disrespect. He just simply believes in the talent of his team, and he thinks New Orleans would have continued its run if it had gotten by the Vikings last season.

So, during an interview with Bleacher Report, Kamara said that the Saints would have “beat the (expletive)” out of the Eagles if they had played in the NFC title game.

“Yeah, that’s what I said,” Kamara said. “I don’t care if we’re playing against the Monstars, my team, whatever team I’m on, I’m going to say we’re going to win. Period

“I guarantee with any other guy in this league that feels strongly that they’re on. It’s no disrespect, direct disrespect. I didn’t call direct names. It’s just my team against your team. That’s all I’m going to say about that.”

The Saints play the Eagles this weekend at the Superdome. They are currently 4-5 and fighting to keep their season alive. ...