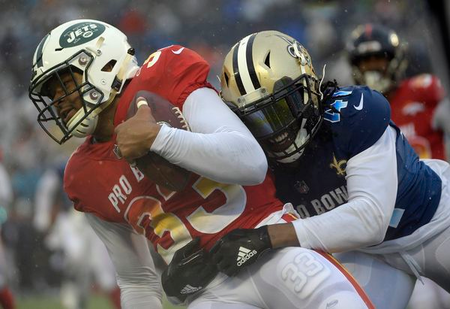 AFC safety Jamal Adams (33), of the New York Jets, is stopped by NFC running back Alvin Kamara (41), of the New Orleans Saints, after intercepting a pass during the second half of the NFL Pro Bowl football game Sunday, Jan. 27, 2019, in Orlando, Fla. (Phelan Ebenhack)

For as much as Alvin Kamara has been an offensive dynamo for the New Orleans Saints during his two NFL seasons, he’s never had a chance to show what he could do on defense.

The running back moved to that side of the ball during the fourth quarter of the Pro Bowl on Sunday (Jan. 27) in Orlando, Florida, and rushed around the right side of the offensive line quickly enough to put a hand on Houston Texans quarterback Deshaun Watson. ...