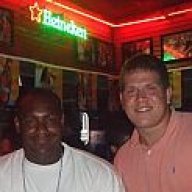 Offline
The Chiefs and veteran tight end tony gonzales have still not come to a contract agreement, and he says he will explore the open market, considering we have plenty of cap room what do you guys think about adding the one offensive weapon we seem to be lacking???

Offline
No, no and no thanks.

Offline
I'm all for it depending on availability of cap room and solid defensive free agents.

Offline
He's not gonna sign for cheap, this will likely be his final contract. I'd rather draft one, no sooner than the 3rd round though.

SaintAkira said:
He's not gonna sign for cheap, this will likely be his final contract. I'd rather draft one, no sooner than the 3rd round though.
Click to expand...

Offline
I wouldn't think about that till we shore up the defense. Adequate isn't good enough. I still miss the dome patrol. I want to see a defense flying around knocking balls out & getting sacks. If Tony Gonzales can do that then I'm all for it.

tak said:
If Tony Gonzales can do that then I'm all for it.
Click to expand...

Offline
It really depends on how much he wants, but we can probably get Daniel Graham for a much better deal. Brees is already a great QB without a decent TE; with a solid TE he'd be one notch under Chuck Norris status.

I'd rather spend more of our cap room on guys like London Fletcher or Asante Samuel.

Offline
Hell yeah sign him. He is still one of the best tight ends in the league. And he's waaayyy better than any tight end we currently have.

Offline
I would rather the Saints sign a up and coming LB star in Lance Briggs and maybe a top corner. Draft a TE 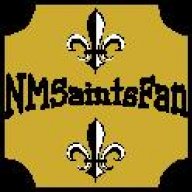 Offline
Definitely need to get top Corner to help strengthen the defensive backfield. We are weak and lacking in depth in that area!

Offline
Yea, Lance Briggs would be awesome. Nate Clements, Asante Samuel...actually all of the people named pretty much. Just not a TE, we need corner help and LB. I mean we can draft a younger TE, there is no reason to pay all the money to a person who mostly blocks and gets 5 catches a game. I know Tony is having a good year, but like I said let's use a 4th round pick and get one.

Offline
Who knows? Maybe TG would be willing to negotiate a decent price for the opportunity to play for the ring in the waning stages of his career.

The guy has demonstrated this season that he can still bring it.:aduncan:

saints_watcher said:
The guy has demonstrated this season that he can still bring it.:aduncan:
Click to expand...

Oh, no doubt he can bring it. I am not saying if he is cheap don't get him, I just don't see him being cheap. He is having a good season. I would just rather youngblood and some CB/LB starters.

peytonknows said:
Oh, no doubt he can bring it. I am not saying if he is cheap don't get him, I just don't see him being cheap. He is having a good season. I would just rather youngblood and some CB/LB starters.
Click to expand...

Why not both? The Saints are in a rapid building mode. If we get the opportunity to go up against the Chargers in the big game in the next couple of years, I think it could be beneficial to have Gonzalez on our side. Considering he would possibly get such an opportunity to get back at his rival in the AFC west, maybe he would consider the possibility at a decent price. Just sayin':dunno:

Offline
I, too, think it is imperative that we address the defensive side of the ball. Inevitably, that means bringing in two LBs, two CBs and a DT. Guys like Lance Briggs, Cato June, Nate Clements and Asante Samuel make sense and we have to try to grab one or two of those guys. However, I do believe that it is crucial that we bring in a TE who is capable of further stretching the defense and opening things up for our backs.

A solid TE can also be important in the red zone where we are next to last in the league in goal-to-go situations. How many passes have we seen Brees try to fit in there to Campbell that just did not work? Also, think of the touchdowns that have been dropped this season by Conwell and Campbell. Against the Ravens, we were moving the ball, trying to get back in the game while there was still time on the clock and went to Campbell twice in the redzone only to watch him drop two catchable passes.

We are in desperate need of a TE who can become a safety valve and who can help us improve our redzone numbers. If that is Gonzales, I would be ecstatic. But even if not, it has to be someone who is capable and will truly help this team out.
Show hidden low quality content