Another Saint superfan has filed a lawsuit against the NFL; this one alleged fraud (1 Viewer) 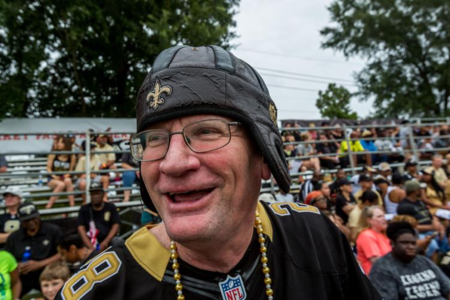 Attorney and Saints fan Tony LeMon of Covington, who has worn his Saints leather helmet to games for the past 20 years, has filed a lawsuit against the NFL alleging fraud over the missed call in the Saints/Rams game.
Advocate staff photo by SCOTT THRELKELD

By Sara Pagones | The Advocate

Tony LeMon, who served a stint as first assistant in 22nd Judicial District Attorney Warren Montgomery's office, knows larceny when he sees it, but the Saints fan and lawyer, who is now in private practice, is going after the NFL for the missed-call debacle.

LeMon filed a suit in Orleans Parish Civil District Court on Friday against the NFL alleging fraud, unjust enrichment and "detrimental reliance," a term used for forcing someone to perform their obligations under a contract.

Any damages would go to local charities, he said, and the suit stipulates damages are to be under $75,000. That ceiling prevents any effort to move the suit to federal court, he said.

Alleging fraud "can eliminate many of the NFL's technical defenses for a dismissal," LeMon said. ...