Any orchid growers in here? (1 Viewer)

Offline
I'll start this thread by saying I know very little about orchid care. All I really knew was that they are really pretty and I'd heard they were difficult to maintain. That said, about a couple of weeks into the Covid work from home deal I got the bright idea of asking my mom, who lives in Hawaii, to send me a couple of orchids. I've already got some ginger that came from her place and I thought it'd be a cool way to start a new hobby with plants from my mom's place and of course my mom was excited to send me some. A week or so later, I get this box.. it's no small box. I'm expecting two or three, what i get is a huge variety of orchids, dendrobium (I've learned a lot since then), bromieliads, spider plants, air plants and a couple of ferns. I panicked. I sent out feelers to everyone I knew that might be interested in orchids, which consisted of one person. I asked my mom & , lmao, she told me to read some books. So, I did a LOT of research and got in touch with some local orchid growers. Basically, I stressed over killing the plants my mom sent me. So I finally called my mom and asked basically asked her What the Fork!, I asked for a couple and you send me an orchard. Her response was priceless & typical. She said don't worry if they die. Most of them she pulled out of her compost pile or were just laying around. So, I took my time and decided on what I would do.

For the one true orchid, I put in half a coconut shell with orchid bark. I don't think it's going to make it though. The base is basically brown. The leaves look fine, but the rest of the plant doesn't look good at all. For the dendrobiums (nobile?), I've mounted on various pieces of driftwood with sphagnum moss (yes, I know they don't like salt water and have taken precautions) and heart pine. I've mounted them because I know they can't handle the winters. Most look pretty weel, but I keep getting spots on the leaves, which I believe to be fungal infections, so definitely worried those will make it. Still, I love the way they look mounted. Just hoping they make it. The Bromeliads have done the best though. After reading up I put them in a pot with a bark/soil mixture & so far they've done really well. One of the larger one's even gave me an incredible bloom, which I've since found out is a one-time shot. I actually felt a little privileged to have it.. I've got another smaller one blooming now, but I don't think it's a one time bloom. I also planted the spider plants, one variegated, one not and those are doing very well also.

Offline
I'm pretty much a noob when it comes to all things gardening, but sounds like an interesting project. Good luck.

DaveXA said:
I'm pretty much a noob when it comes to all things gardening, but sounds like an interesting project. Good luck.

Honestly, it's been a pain in the butt, but I've really enjoyed it!
OP

Offline
This was my first brom boom. 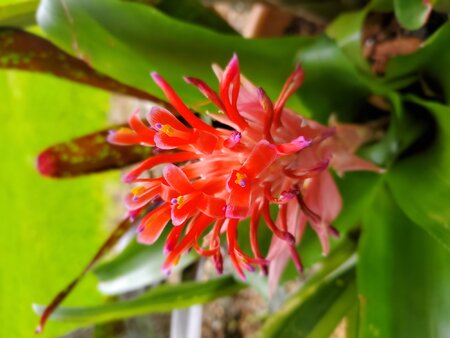 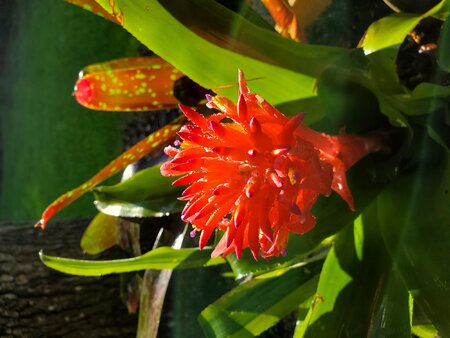 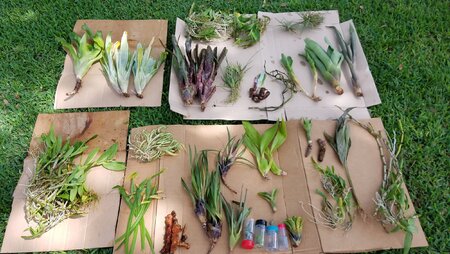 This is a picture after my unboxing.. I can post some pics of the mounts and pottings as well if anyone cares to see.

Offline
This is my wife’s thing. She loves orchids and gets her two to rebloom every year now for 3 years for the one and about ten with the other. Before she took them over, I was more into the how slowly can I kill them as opposed to seeing if they could flourish with her

Online
I used to read the Brenda Starr comic strip in the funnies, and I think I remember her boyfriend (the guy with the eye patch) grew orchids

Online
Really cool. I can't manage to keep an orchid alive for more than a few weeks.


Pro-tip. Pineapples are bromeliads. You can (allegedly) take the top off of a pineapple and pull off a few leaves, dry it out, and root it. I've tried it a few times and haven't gotten it to work yet, but there's a bunch of info out there about it.

Online
All I know about orchids I learned from the movie Adaptation.

rajncajn said:
This was my first brom boom.

That looks like a bromeliad
I have a couple of orchids in my kitchen window (facing east). They get filtered light. They have been alive for many years and flower every year. The flowers last a long time. I mist and water them with rain water 1-2 times a week.
Good luck! They are divas for sure but worth it, I think.

Offline
Sorry, just saw that you said it was a bromeliad.

Brad Mojo said:
All I know about orchids I learned from the movie Adaptation.
Click to expand...

You should check out Brenda Starr
OP

Offline
So, I took a bunch of pics, but the site says they're too large to upload. I'll work on downsizing them so I can post. 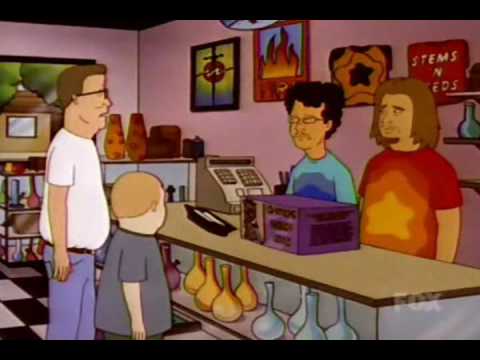