Anybody ever play 'Strat-o-Matic' growing up? (1 Viewer)

Offline
While the thread title opens me up to all kinds of abuse it was a great game.

For you 'youngsters' who have your fancy "Exit-Boxes" and your high flatun' Madden games, this was a dice based sports board game that relied on 'statistics' (or so they would have you believe) and allowed you to play against an opponent by using cards of players.

Baseball was the best but football was a close second. I recall on more than one occasion, the lowley Saints would go against a team like the Bradshaw led Steelers and have the Saints pull out a close game that may or may not have had something to do with me rolling the dice a few times so that FINALLY Rich Szaro would kick that ellusive 49 yard FG to win it all.

In all honesty, it was the precursor to the fantasy games that are so popular today.

(David Robbins' 'Tommy Meyers' thread got me to remaniscing. If anyone is interested in my memories of the bicentenial, 'Chico and the Man' or the Evil Knevial 'Sky Cycle', email me at "WhentheheckdidIgetOld.com") 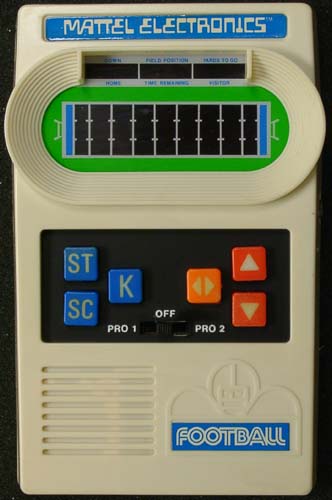 If you waited for the defense to come to you, you could basically run down the sideline for..well...until you heard the goofy music indicating you scored.

Yeah. "pro 2" was much more difficult. 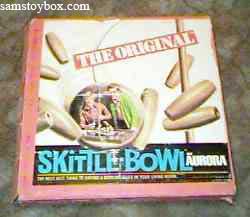 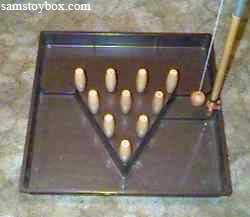 Offline
That one was easy, ra(not his real name)

All you had to was pretend you 'smelled smoke' and when everyone was scurrying around to find the source, you knocked the pins over with your hands.

Hey, anyone ever played Strat-o-Matic???

Offline
Ahhh, very nice Saint77, the updated version or 'Football II' as the kids called it.

Mattel had employed (or so they would have you beleive) a team of engineers to make the game harder. Truth be told they hired a million monkeys to sit in front of a million typewriters to come up with the 'code' for this but, for thirty minutes ,this was more challenging. Until I realized that the monkies added a few more buttons and IF YOU WAITED UNTIL THE DEFENSE CAME TO YOU, YOU COULD RUN DOWN THE SIDELINES.

One time, in Strat-o-Matic, I made Chuck Muncie run for 400 yards.

Offline
Strat-o-matic? Sorry, watts, I don't remember that one.

I hate you but yet I dont know you.

This one was a tough one. You had to switch from offense to defense. And the blinking light changed from, if I can recall, the QB to what I think was the MLB.

The monkies(if that was thier real name) really threw me for a doozie. If memory serves, I COULD NOT beat this game and would suggest to my opponent that we play "Hungry, Hungry Hippos".

In Strat-o-Matic, Tom Blanchard use to kick sixty yard punts at will.
Last edited: Nov 3, 2006

Offline
Never played it, but this looks like it. 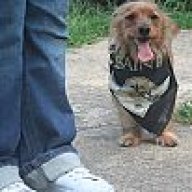 Offline
I was a big-time Strat-o-matic guy for years -- even ran a few leagues with a bunch of other guys, and in college, my cousin (and roommate) and I would bust our behinds in school and at work during the week - but Friday-Sunday was one big party that Strat-o-matic played a big role in. We added some of our own rules, including a chance to audible a couple of times per half.

I still have the game somewhere - and four seasons worth of cards (mostly from the early 80s).

There was another good game I played a lot when I was younger - I think I had three electric football sets over the years, and I also remember Monday Night Football, Talking Football and See-Action Football - but there was a college game called Bowl Bound that friends and I ran our own leagues with growing up. The pro version was called Paydirt - Great games!
Last edited: Nov 3, 2006

Offline
Never played strat-o-matic, but I was an APBA addict for years and years

Offline
i love stratomatic.. i started playing in 85 we would replay the entire season...
of course i was the saints. well no one else wanted them but me... but i taught them... hehehhee

whiteshadowen said:
Never played strat-o-matic, but I was an APBA addict for years and years
Click to expand...

Me too, but (1) I found a group called APBAA in a church basement, huddled around a coffee urn and smoking cigarettes, and (2) I started kissing girls.

But it was great while it lasted. Sort of like poker night for geek/jock teenagers.