Are the Coaches Betting that Trey Hendrickson is Ready to Take a Major Leap Forward this Season? (1 Viewer)

Offline
As we all know, especially us fans think the Saints are thin at DE. It seems to me that the wildcard is Trey Hendrickson. He was a 3rd round draft choice who really moved up the boards after the Senior Bowl and the Combine. By his numbers, he sure looks like he has the physical tools to be a quality DE. By his numbers, it sure looks like he has the speed required to be an effective DE including initial burst. I have not noticed him much, but the few times I did, he looked good against the run. I haven't seen him put much pressure on the QB, but I didn't follow him closely in the 1st 2 years.

Are the coaches confident that he is going to make a major leap this year? If so, that would explain a lot about the team not going after other DEs.

He showed up in Indianapolis at 6-foot-4, 266 pounds and finished among the top 12 defensive linemen in six drills, including first in the 60-yard shuttle (11.43 seconds) and second in the 20-yard shuttle (4.20). The other question that teams often throw at Hendrickson is about his athleticism, which puzzles him. He hopes he ended that conversation by running a 4.65-second 40-yard dash (seventh among d-linemen at the Combine) and showing off a 33.5-inch vertical leap (eighth).
Click to expand...

Do you think he can make a big enough improvement this year to be a quality DE?

btw: I know there have been some thoughts on him in other threads, but I thought this deserved it's own thread now that it looks like we are passing on Ansah.

Offline
I think we've tried to go after other DEs. It hasn't worked out.

I doubt Hendrickson is being counted on for anything but he's still a piece that could play a role. Obviously, most of our chips are being placed on Davenport becoming a 90% snap player.

Offline
I want to see what he has. I think he creates more pressure than he gets credit for because he doesn't have the sacks. I wish I had pressure numbers but his QB hit numbers aren't bad for a small sample size. I'm seeing a QB hit every 46 snaps over his career. That went down to 34 snaps per QB hit last year.

For reference, over the last two years, Jordan had 38 snaps per QB hit and Okafor was at 63 snaps per QB hit. Davenport had 35 snaps per hit last year. They played more run defense and had larger sample sizes but it seems like he's getting to the QB decently by the numbers.
Last edited: May 9, 2019

Offline
He’s definitely a wild-card... but the fact he was a healthy inactive for most of last season isn’t very encouraging.

Offline
I think it’s still too early to give up on T-Rex, but a 1 year vet minimum deal for William Hayes wouldn’t upset me.

Offline
unless some huge breakout season occurs, I think Trey will be a quality backup.
Last edited: May 8, 2019

Offline
I think a huge step for Hendrickson would be to show some durability and stay on the field!!

From what I've seen he can't play more than 8 or 10 snaps without getting some kind of owie and needs to be helped from the field!!

I'm not questioning his character at all but his toughness and durability can stand a significant improvement. I'm not sold on him or impressed at all.

That said, I am not comfortable with the DE situation. I don't think that there's sufficient depth. That depth in my view could come either from free agency, veteran or rookie. I believe that we need a fourth DE, even if he's inactive most of the time. 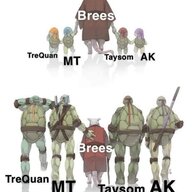 Online
I believe that T-Rex was groomed. He and an UDFA will be #3 and #4 DE. IMO

Offline
Short answer? Probably so. Or at least the coaches decided that we don't have the cap room to build a deep and elite D-line. A team that can afford a top end free agent DE, probably doesn't have two of them already.

Online
It's possible that the Saints were waiting for the deadline to pass that allows teams to sign free agents without the signing affecting possible compensation picks (not that they ever get any).

BoNcHiE said:
I think we've tried to go after other DEs. It hasn't worked out.

I doubt Hendrickson is being counted on for anything but he's still a piece that could play a role. Obviously, most of our chips are being placed on Davenport becoming a 90% snap player.
Click to expand...

This. It's pretty obvious that they wanted to sign DEs but winced at the price tags.

I hope Hendrickson takes the next step for sure, but the staff's approach this offseasons doesn't give me confidence that they are ready for him to be active on game day.

Offline
I’m foggy on the timeline now, was Mario Edwards signed after the Saints poked around Ansah and Quinn? I wasn’t sure his intended use, but I would imagine he’s in to backup Cam Jordan more than anything.

I really like the defensive line and what they could be, but you’re right on the edge rusher depth. I was a fan of Hendrickson from day one when he was drafted. He’s a solid end and can hold up against the run, but with those short arms, he’s better inside to get to the QB. He’s the off-brand Solomon Thomas.

When you look two deep at every role on the defensive line, Cam has a solid spell in Edwards. Rankins (when healthy) and Onyemata are great inside. We have two solid, true NTs in Brown and Stallworth. Hendrickson is versatile and can do some good things. The worrisome part is definitely speed rusher on the edge behind Davenport. If I were predicting right now, I would guess Porter Gustin is the closest thing on the roster to replicating that skill set. May be one to watch.

Offline
Hopefully Davenport can get a full offseason in, I'm excited to see what he can do now that he's going to be counted on to be a full time DE. I can see Mario Edwards spelling him on some running downs to let him rest.

Offline
IMO Hendrickson is a younger version of Okafor. Very good verses the run and adequate in the pass rush. He’s still young and hasn’t had much experience so there’s a lot of room for improvement.

Offline
As the WR issue showed last season we have to find some more quality depth. Plus didnt Hendricks also have a shot to win the position when Okafor went down in 2017? He only followed up with a 2018 season of inactivites. Maybe this is his season but I'm betting we are looking hard at vet options.
Show hidden low quality content