As the Season Comes Down to the Wire, the Saints Rise to the Top: NFL Week 16 (1 Viewer) 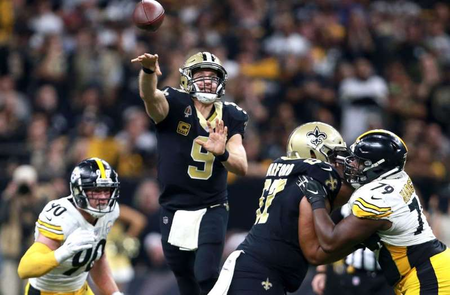 Back on Sept. 23, Saints receiver Michael Thomas described coming to New Orleans in 2016 as a sort of calling, and he told me its purpose was to right the wrong of an all-time great quarterback having just one Super Bowl ring. As Thomas explained that night, “I was brought here to send him out the right way.”

Three months later that mission is on track, with the finish line in sight.

And again, it was a critical play from the best receiver Drew Brees has ever played with that inched the Saints closer to that destination. This one came on second-and-goal with 1:28 left, New Orleans down 28-24 and the ball at the Steelers 2-yard line. Brees took the shotgun snap and sprinted right. Thomas, split right, was isolated on Steelers corner Joe Haden. What happened next is what’s become predictable.

Thomas shook his shoulders at the line, broke outside towards the corner, then back at the pylon. Even in the close quarters of the red zone, the 6’3”, 212-pounder was able to create enough separation for Brees to get the ball to him. The only question? Whether Thomas, as he came back to it, overran the goal line and left the end zone before putting the ball away. Initially, th officials (and we’ll get to them a little later on) ruled that he did. ...