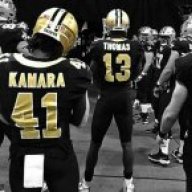 Offline
Does Payton go with the read option or a more conventional offense?

Offline
If he's sticking with a conventional offense, then Winston (assuming he can/does lose the bad decision/interception-heavy part of his game) is the far better option, and I don't really see why he would run it if Taysom is 'the guy'. If he's planning a mixed approach or read-option approach, then Taysom (or even a draft pick) may be the guy. As it stands, I feel like Winston has the edge over Taysom simply because of age and pedigree, but he has to prove it on the field - as does Taysom.

It'll be a fun battle to watch when the time comes, though.

Online
If Taysom is the starter I think we’ll have a different offense designed around him. I think that’s part of the reason we always have to have a Teddy Bridgewater or Jameis Winston backup. So we don’t have to totally change the offense if something happens to Drew.

Offline
I agree-different offense with Taysom. Defenses will have to prepare for a QB run, RB run, pitch option, screen, fake screen and run, short pass, medium pass and deep pass. And, cover Kamara, stop Murray, cover 2 capable TE's in Cook & the rookie, and Thomas and Sanders. What a handful.

Offline
Taysom has been learning our system for a few years now. It’s a conventional offense. I’m sure we would run a conventional offense, with some RPO for TH7 bc of his ability to run. So, it would be the same offense, just modified to accommodate his skill set. Having a guy that can run, doesn’t mean that you change your offense. It allows you to add to it.

Offline
A lot of us seem to forget that Taysom is practicing a lot, and Brees, Payton, Mike, and the QB coach work with him. This year's Taysom is not last year's Taysom. He's a smart man and he is learning. Pigeon hole him at your own peril.

Offline
I think Payton has a very large number of new plays that use his normal concepts, but leverage the decisions the defense is forced to make and take advantage of a QB’s athleticism.

I think he knows that the odds of getting another franchise QB is very slim. And while that MAY have happened, I believe that Payton’s plan for the last few years has been to take advantage of his play design strength along with the multitude of dual QBs who come out every year but are lower valued than 6’5” laser rocket armed pocket QBs. 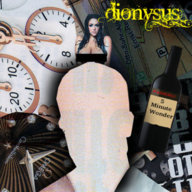 Offline
I think many of us are looking at how TH7 is used currently in our offense, and assuming that TH7 as QB will look the same, just taking EVERY snap, rather than select snaps. I don't think that's the vision....I HOPE that's not the vision. Currently, TH7 is a very nimble and powerful runner who seems to be intent on punishing defenders who try to tackle him. While I LOVE that mindset in his current role, that mindset cannot carryover to a starting QB role; but I worry that mindset has become ingrained in his playing style. If he wants to run as a QB, I'd prefer he stop trucking would-be tacklers and somehow change his mindset to making defenders miss, and sliding to minimize chances of an injurious collision. Leave the "trucking" to Tommy Stevens, LOL!

I don't want a Cam Newton QB....so if TH7 at QB looks like that, I hope someone beats him out. If TH7 even remotely resembles Lamar Jackson or Steve Young, I absolutely am interested in seeing what CSP conjures up with a dual-threat QB at his disposal.

Offline
I think that if TH#7 is the starter and Payton runs an offense to suit his skillset then they'd better have a viable backup option because Hill will be lucky to last half a season.

Yeah I get it that Lamar Jackson is the latest flavor of the month because the media is quick to label him that way but like all the running QB's that came before him I give him 3 years until all the hits that he takes start to catch up and the same thing will happen to Taysom Hill when he takes one hit too many.

Online
SP will continue to morph or evolve his offense with a good bit of consideration given to who the QB is and what his strengths and weaknesses are.
IF Taysom wins the job, it won't be simply because of his RPO skills... to win the job, he'll have to show that he can run SP's offense in all facets.
He will have to prove that he can a conventional offense, or at least a version of a conventional offense, better than any QB we bring in to compete.
Better than Winston and whoever else we bring in.

IF he does, I'm sure SP will put plenty of RPO on the play sheet, but I think he will also temper that with the thought of keeping Taysom healthy...
Not constantly taking hits. I'd imagine we'd run a similar offense to what we run now, but give Taysom some leeway to run for extra yardage if it's there.
Taysom will have to show he can throw first, throw second, throw third, scramble looking to throw, throw if possible, then run. Anything else and defenses
will simply spy him, keep him in the pocket, and force him to throw. That's how defenses learned to play Cam Newton and others, with mixed results of course.

duckjr78 said:
I think Payton has a very large number of new plays that use his normal concepts, but leverage the decisions the defense is forced to make and take advantage of a QB’s athleticism.

I think he knows that the odds of getting another franchise QB is very slim. And while that MAY have happened, I believe that Payton’s plan for the last few years has been to take advantage of his play design strength along with the multitude of dual QBs who come out every year but are lower valued than 6’5” laser rocket armed pocket QBs.
Click to expand...

But he just got a 6'5" laser rocket arm, former overall #1, Heisman trophy winner with a national championship in Jameis Winston who agreed to play here for dirt in order to be here.

If anything, the Taysom bet has been well-hedged and as much as I love the excitement Taysom hill brings, I can't help, but to believe JW is the next QB.

Just imagine Payton and his system/creativity with a prototypical QB and the current weapons. It might not be as spectacular as Brees has been, but then again it could be better with someone who can push the ball downfield with ease. 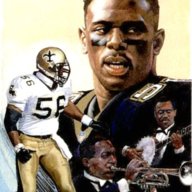 Online
I love Taysom and think he can have a big future with the Saints, but all of this public talk out of Payton makes me feel like there’s some puffing going on. Maybe a touch of a smokescreen to mask future negotiations and transactions? It’s just so hard to see Payton restructuring his entire offense for a 31 or 32-year-old player with an extremely limited passing sample size

Offline
I think it will be a more run based offense using that to set up deep passes like what we saw in the playoff game. The thing about Taysom running is we cant have him doing it 20 times a game. He wont hold up with that many hits per game. I still think he will end up sharing the role with Winston in 2021.

Offline
"Second string" QB Taysom Hill has intangibles..you can't teach that, but you can develop that into a dangerous play maker..even if just a game manager at first. Brilliant offensive mastermind Sean Payton, mentor in Drew Brees, real time game experience in the huddle with Brees, playing every skill position = a new level of understanding the game = potential success in this league

dtc said:
But he just got a 6'5" laser rocket arm, former overall #1, Heisman trophy winner with a national championship in Jameis Winston who agreed to play here for dirt in order to be here.
Click to expand...

I believe Jameis thinks he can unseat T Hill...I also believe T Hill will give it all he has to make outstanding plays to move the chains and live out his dream to be a starting QB in this league...so let the competition begin

Offline
Just to put this out there due to talk of Winston's supposed unrivaled rocket arm and elite prowess on the field, he was recently voted into top 10 worst deep ball QB's in the league