Attitude going into the SB (1 Viewer)

Offline
On Monday I really expected more respect from the national media for a hard won game on Sunday. I also expected the media to tilt more towards the Colts for the Super Bowl match up. It is hard not to, that Colts team has been great this year. But after three days of coverage and a general attitude from the media that we didn't deserve to win against the Vikings and a general disregard for our 13-0 start I like how this is shaping up (after generally ****** off). I can't believe this Saints team isn't going to go into the Super Bowl with a major chip on its shoulder. The attitude from the media about the Colts sure seems to be a been there and done that mentality and hand us our trophy when we win. The media says everybody is pulling for us, but really we don't have a chance.

Drew Brees said that they wanted to model the Patriots team, well we are off to a good start. I remember when the Patriots played the Rams, then the greatest show on turf, and weren't supposed to have much of a chance. I'll take a run like that any day.

I wanted to post because I wanted to see if others thought the same way. Thinking like this has turned me from being ****** off at all the dismissals of our team into having a big smile every time we get discounted. That's right media, feed the beast. 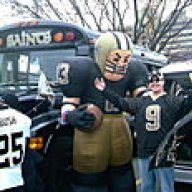 Offline
I'm with ya....seems like the only people giving us a chance are us and Vegas (just the way I like it)

Offline
I feel the same way!! I believe the Saints Team is playing at a higher level then the AFC teams. Kind of like the SEC compared to other conferences. We hit harder, we are faster and we score more points. I am praying this game will be a reality check for all the media and the Coltz fans. Also, the Colts have not scored the amount of points we scored this year. Not even close. Payton Manning better be on his A game, because I know we can put up at least 30-40pts. Hell, Drew was little off last weekend and we still scored 31. You feel me?
Show hidden low quality content

Going to my first away game