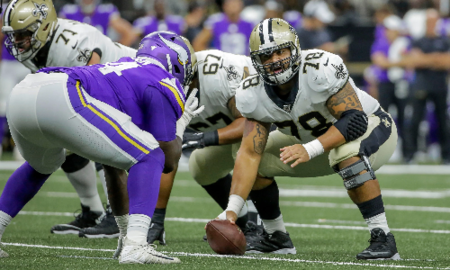 The New Orleans Saints won’t make it official just yet, but all signs point to rookie Erik McCoy winning the starting job at center. McCoy has been snapping the ball with the first-team offense for weeks, and he started the Saints’ first preseason game against the Minnesota Vikings, ultimately playing 28 snaps in the middle of the offensive line.

One analyst who was impressed by McCoy’s performance was NFL Network’s Brian Baldinger, who highlighted McCoy on Twitter.

“His run blocking is what impressed me. He took the nose tackle for the Vikings for a lot of rides. I mean it was play after play,” Baldinger said. “This is one-on-one right here, look at the push. It’s like a John Deere tractor right here. Take the Vikings nose tackle off the ball like that.”