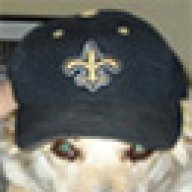 Offline
it could be worse. you could be a Redskin fan. You know i was rooting for them just because of the Cowboys/Redskins rivalry.

But you know what I realized during the game vs the cowboys that Collins was so successful because "he wasnt throwing to the open receivers" he was throwing the routes.

The seahawks, and everyone else i presume, made this connection and TCollins couldnt do "squat" because omg all his routes were covered, and he cant "read" the field. I saw numerous openings over the middle that he never even read, taking sacks or throwing it away. He is useless, and as for the interception he threw near the end of the 4th, I knew it before it left his hand, you could tell he was tosssing a floating bomb that you just CANNOT throw anymore in this league.

Joe Gibbs, Its time for you to retire, for good.

Ok i know this isnt Saints related, but just imagine, things could be worse, we could have a useless QB and a coach that should have retired or stayed that way.

Offline
its not gibbs fault

the WR's are dropping passes

and the o-line is blocking for diddly poo

Offline
Why should we be thankful we are not the Redskins?

BigRonJon said:
Why should we be thankful we are not the Redskins?

we have the 10th pick