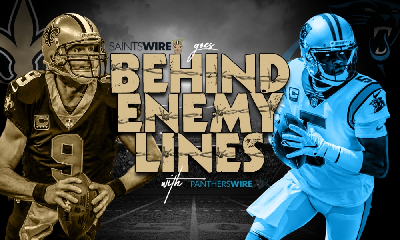 There’s a big matchup brewing between Drew Brees and the New Orleans Saints against Teddy Bridgewater and the Carolina Panthers, so we previewed the game by going to the best source of Panthers analysis we know: Tim Weaver over at Panthers Wire.

We exchanged a series of questions and answers to touch on several topics in this week’s game, which could get interesting considering how much star talent isn’t available for either team. Both squads will have to adjust and find new ways to win on Sunday, and the more creative team just might come out ahead. Here’s what we learned:

1. So how has Teddy Bridgewater looked? He became a Saints fan favorite in short order and still has a lot of good will going his way, but not this week. Has he lived up to expectations after signing a big contract with Carolina in free agency?

It’s still early to say if he’ll live up to the contract he signed. Bridgewater has been mostly what we expected. He’s a solid QB who generally makes good decisions and is a very accurate passer. Teddy’s deep ball has also been pretty on-point this year, even if there haven’t been too many of them. He’s also a tremendous fit for Joe Brady’s offense.