Big reason why the San Fran game is important... (1 Viewer)

Offline
This Sunday is a huge game because we need to see if the Saints defense can stop the run. No one can shut down Vick but we did shut down Dunn last week. I think if the Saints defense proves they can shut down basically the second best running back in the leauge (behind LT) then we can get deep into the playoffs. If we do not then we are going to have some problems because if you can't shut down the run, no matter how good your offense is, you can't win football games. With the addition of Hollis Thomas no one can run up the middle on us but we always get beat to the outside. Lets see if the D-fense can learn from their mistakes and shut down the outside the weekend! Also would like to see Reggie get some more carries this weekend because I think he is coming along finally and is ready to have the break out game!

you don't mean gore do you? He is good but, Alexander, L Johnson to name two are better backs than Gore. barber is the best back we face until the playoffs start. Gore is good, but not that good. 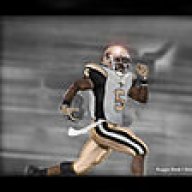 Offline
It's important because it's the NEXT GAME.

Offline
A win Sunday is important because:

Offline
Gore is a very good back for the 49ers system. But I think the focus of your concern is misplaced. The success that the 49ers enjoy in the running game starts with their offensive line. With Jennings and Allen on the left side, they present a very big, physical offensive line. and the offensive lineman who has improved the most is RT Harris. He's always been a good run blocker, but he's getting less antsy in the passing game, not committing as many penalties. This offensive line is the key to the 49ers offense.

And Gore is a very good back for this offensive system; he runs hard and has a nice burst through the hole.

btw, another guy to keep an eye on is Vernon Davis. Last week he got the vast majority of snaps at TE.

BiloxiSaint1 said:
It's important because it's the NEXT GAME.
Click to expand...

I think the same thing everytime I see a thread trumpeting the weeks matchup as THE game. It is THE game....they all are. But oddly enough they aren't. You need ten, preferrably eleven. Winning this one make those numbers easier.

Offline
I'm concerned that we control Gore, not stop him.

He's averaging over 5 yds per carry, and you've got to figure that the Niners will run him at least 20 times against us with our run defense. That equates to a 100 yd rushing day for him... Not a big deal because SF has already lost twice when Gore ran for more than 100 yds this year.

The key is, once again, for our O to play turnover free like we did against the Falcons. The Niners aren't equipped to stop our O. Our O can help our D with sustained drives.

This game is important to me because I believe we still have a legitimate shot at holding on to the 2nd seed in the NFC and getting the first round bye and home field in January.

The Cowboys game on the 10th could literally decide that second seed.

We can't go into that Cowboys' game losing to the Niners the week before. It's paramount that we go into the Cowboys game with momentum, and that momentum began with our win over Hotlanta last week, and has to continue with a win over SF Sunday...

st.randy said:
I think the same thing everytime I see a thread trumpeting the weeks matchup as THE game. It is THE game....they all are. But oddly enough they aren't. You need ten, preferrably eleven. Winning this one make those numbers easier.
Click to expand...

This team needs to win EVERY GAME, and they are Fully capable of it, They realize theier faith rest in they're hands now, Payton has coached these guys into a Group that can win games At Will if they don't screw themselves over.

Again lets chill with the "This is the game" Threads

Offline
this will be a great game if we can capitalize however I think the 2 more important games this season is going to be vs Dallas and the Giants.

specificly Dallas, since they have gotten hot lately.

anyone notice we have a "this is the most important game of the season" every week now?

LPaulT said:
A win Sunday is important because:

Hopefully Dallas will lose to the Giants.

Offline
I believe all the talk about "this is the game" comes from the coaches and the players saying one game at a time. The most important game is the next one. Even Payton eludes to we have won 7 games and our next goal is 8.

Offline
The SF game is a key game because we've lost two in a row at home and need to re-establish our dominance in the Dome, and because we have what appear to be tougher tests coming up against Dallas on the road and the Giants and Panthers, so it would put us in a precarious position if we dropped the game to SF. I think Payton will have the team focused and they'll come out strong like they did against Atlanta. If we can continue to be disciplined and balanced on offense and don't turn the ball over, we will take this game.
Show hidden low quality content

WR is the 3rd most important in football now.