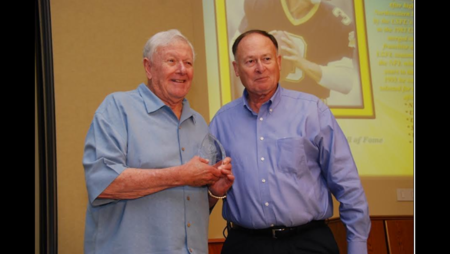 Photo by: Kameryn Rome/Correspondent for The Houma Times/Daily Comet
Bobby Hebert Sr. accepts an award at the Bayou Region Athletic Hall of Fame
for his son, Bobby Hebert Jr., from Ken Friedlander.

“He’s a fighter,” Hebert said to co-host Kristian Garic, before breaking down in tears. “He’s tough, but you can be tough and the virus can still overwhelm you.”

“You get numb and then you know sometimes you don’t want to accept reality, what you’re dealing with,” Hebert said. “It’s just trying times right now and we need to listen to what the doctors are saying, what the professionals are saying… because it’s an unseen enemy.”