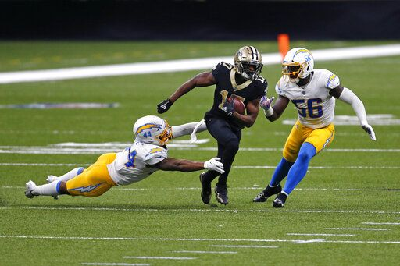 NEW ORLEANS -- Emmanuel Sanders is beginning to produce the way Saints quarterback Drew Brees predicted he would when New Orleans signed the veteran receiver away from San Francisco as a free agent.

Now in his 11th season, Sanders caught a single-game, career-high 12 passes for 122 yards to help the Saints defeat the Chargers 30-27 in overtime on Monday night.

Sanders might not see as many passes thrown his way after the anticipated return of 2019 Offensive Player of the Year Michael Thomas after New Orleans' Week 6 bye. But Sanders' evidently increasing comfort in New Orleans' offense provides evidence of how the Saints could make it tough for opposing defenses to focus coverage too heavily on Thomas as the season wears on.

"He's a weapon. He can do a lot of things. He's a savvy football player," Brees said of Sanders, who won a Super Bowl with Denver and played in last season's Super Bowl with the 49ers. "We didn't really get an offseason together. We didn't get preseason games. So, you get into the season. And obviously, Mike goes down. And then you're just kind of trying to find your rhythm and your timing with not just him, but with everybody.