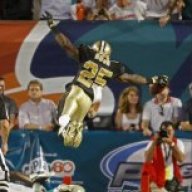 So the question is Brees (NYJ) or Schaub (OAK)?

Offline
Breesus and Manningham. I think Brees is going to have a monster game he's still mad at Ryan for 2006. 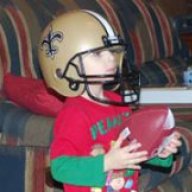 Offline
I would roll with Brees and Marshall. I think this is the week Marshall will return to form!

Offline
I'll buck the early trend and say that I'd start Schaub. He's playing a lesser defense and has been putting up huge numbers the last two weeks. Plus their at home, right? Go with Schaub.

As for the other, I say roll with Marshall for two reasons. One, Dallas is going to score points, and Denver will be throwing the ball throughout the game to score with the Cowboys. Two, the Giants are playing the Chiefs, and chances are pretty good that they'll build a big enough lead to just stick to the run in the 2nd half. I doubt Manningham gets a bunch of targets. Add this to the fact that Smith is Eli's go-to guy right now, and I think Manningham's targets are lower than a typical week against an average opponent. KC may well be the worst team in the NFL right now...it's close race between them, Oakland, and Tampa.

Offline
I've had Schaub in the past few years, and it's extremely rare for him to have 2 big weeks in a row, much less 3. He may outdo Brees, but I'd roll with the consistency over rolling the dice on a very inconsistent QB against a bad team.

Offline
I would start Schaub. Kubiak is showing that he is going to pass the ball a lot this year. He seems to be abandoning the run. I think the raiders are going to be able to score by running the ball on houston also. I just seem to respect Ryan's defense and think if you are ever going to bench brees it will be this week.

Marshall is a definate start in my opinion because the Giants aren't going to have to pass the ball at all. They will be able to run the ball at will. Marshall is due for a monster game and the cowboys really can't stop anybody.

Offline
I would go with Schuab also. Slaton seems less effective in the running game this year and the Texans seem more dependent on the pass. Plus, Schuab finally got Kevin Walter back last week so he has one more dynamic weapon to deploy. OTOH- that may be wishful thinking since I am going to have to start him tomorrow myself.
Show hidden low quality content