Brees, Payton Get Behind 9th Ward Field of Dreams (1 Viewer)

The charitable arms of New Orleans Saints quarterback Drew Brees and coach Sean Payton have teamed to support the effort to resurrect the athletics program at George Washington Carver High School in the 9th Ward.

The Brees Dream Foundation and Payton’s Play It Forward Foundation have agreed to jointly contribute $40,000 to Carver High, covering the school's athletics budget for the next two years.

“There is much more that goes into financing an athletics program than just sporting equipment,” Carver athletics director Brian Bordainick said. “It’s the behind the scenes expenses that can decimate a program, and we are very thankful to both Foundations for their support.”

Bordainick is the force behind the 9th Ward Field of Dreams, an effort to build a football stadium and running track on the school's campus, which along with the rest of the 9th Ward was devastated during Hurricane Katrina and subsequent levee failures. He said the school is $750,000 shy of raising the $2 million needed to build the facility.
Click to expand... 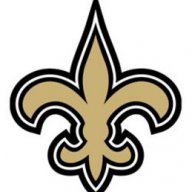 Seems like they are short 600k with 4 days to go- I guess since we won the super bowl I'm in the very giving mood and helped donate some.

If Drew Brees, Coach Payton, and Marhsall Faulk get behind something then I'm all for it.

Offline
this makes me even happier that i took part in the Superfan Calender. i love that its helping the 9th Ward Field of Dreams.
Show hidden low quality content

Brees in the 4th quarter tonight