Offline
Did anyone else notice where the L guard and L tackle of the Broncos lined up? Many of the plays they seemed to be almost a yard or more behind the ball. It happened some in the first half but was really prevalent in the second half when they were running the ball a lot. At one point it seemed Payton was lined up at the same point as these two when he was under center.

(Disclaimer: I am not saying we lost b/c of this. We have the worst defense ever fielded in the NFL and we can thank Roger Goodell in part for that)

Now I am not sure if enough men were on the line of scrimmage with the guard and tackle so far off the ball. I wasn't counting and from the TV, it is hard to see those particulars anyway at the angles they are showing. I just saw it almost on the first play from Denver and wondered why they weren't calling a penalty. It seemed it just got worse throughout the game as if they were saying the refs won't call it so let's see how far back we can go.

I just thought the refs would call it and then that would be then end of them doing that. However, it wasn't called once.

Not sure of the exact rule on this, but I remember several years they started enforcing the tackle must be less than a certain distance back from the center. Let me know what you think.

Online
I noticed that also but I don't know the rule for that penalty. 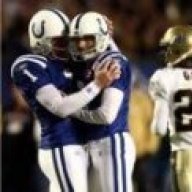 Offline
I noticed a Tom of contact with receivers well past 5 yards. Colston looked like he was getting mugged his whole route, not just 5 yard. Then another 3rd down play ended when defender came up Lance Moores back to knock ball away.

BigA3723 said:
I noticed a Tom of contact with receivers well past 5 yards. Colston looked like he was getting mugged his whole route, not just 5 yard. Then another 3rd down play ended when defender came up Lance Moores back to knock ball away.
Click to expand... 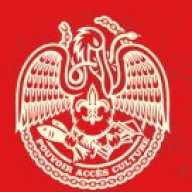 Trey W. said:
I noticed that also but I don't know the rule for that penalty.
Click to expand...

I think it's just an illegal formation penalty (not enough men on the line of scrimmage).
OP
OP

Offline
Yes, the illegal formation penalty - not enough men on the line of scrimmage.
From NFL's digest of rules:
Position of Players at Snap

Offensive team must have at least seven players on line.
Offensive players, not on line, must be at least one yard back at snap.

(Exception: player who takes snap.)
No interior lineman may move abruptly after taking or simulating a three-point stance.
No player of either team may enter neutral zone before snap.
No player of offensive team may charge or move abruptly, after assuming set position, in such manner as to lead defense to believe snap has started. No player of the defensive team within one yard of the line of scrimmage may make an abrupt movement in an attempt to cause the offense to false start.
If a player changes his eligibility, the Referee must alert the defensive captain after player has reported to him.
All players of offensive team must be stationary at snap, except one back who may be in motion parallel to scrimmage line or backward (not forward).
After a shift or huddle all players on offensive team must come to an absolute stop for at least one second with no movement of hands, feet, head, or swaying of body.
Quarterbacks can be called for a false start penalty (five yards) if their actions are judged to be an obvious attempt to draw an opponent offside.
Offensive linemen are permitted to interlock legs.
Show hidden low quality content

Sean Payton and the Denver Broncos come to the Superdome in 2024, who wins?

Sean Payton: Saints and Broncos worked hard to agree on compensation for me
2 3 4