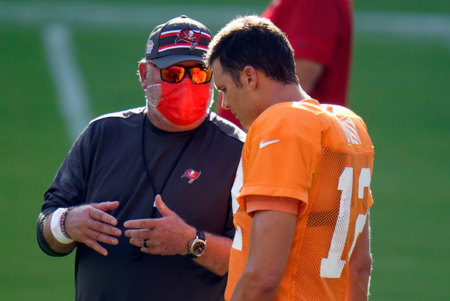 When Tom Brady wrote an essay in April about moving on from the New England Patriots to the Tampa Bay Buccaneers, he strongly indicated he was looking for more positive affirmation than what he was used to getting from Bill Belichick.

After a desultory loss in his Bucs debut, Brady didn’t get that type of reinforcement from Tampa Bay Coach Bruce Arians, at least not publicly.

In comments immediately following a 34-23 loss Sunday to the New Orleans Saints in which Brady threw two interceptions, including one that was returned for a touchdown, Arians told the media that the six-time Super Bowl winner was responsible for both miscues.

The coach said Brady “overthrew” wide receiver Mike Evans on the first pick and absolved Evans of any blame for his read of the defensive coverage. Regarding the pick-six — the kind of disastrous play the Bucs thought they were going to minimize by replacing error-prone quarterback Jameis Winston — Arians said Brady made a “bad decision.”