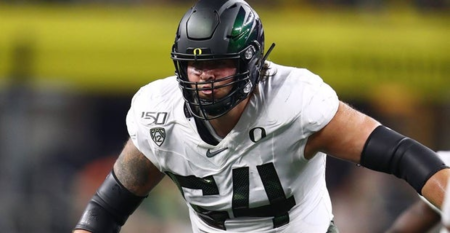 One of the surprises for former Oregon players in the 2020 NFL Draft was that right tackle Calvin Throckmorton went undrafted. Following the draft thought, the lineman was quickly picked up by the New Orleans Saints as one of the many free agents signed on Saturday evening.

It was reported that Throckmorton was given a $110,000 base salary guarantee plus a signing bonus of $12,500 from the Saints as a priority free agent signing. That type of guaranteed money is similar to what an early seventh-round pick makes.

"You don’t want to overreact to NFL Combine performances, but Throckmorton’s was really bad. That lack of athleticism was likely a driver in his fall and may limit him to center in the NFL," wrote PFF's Ben Linsey on why Throckmorton wasn't drafted. ...