Cameron Jordan is forcing everyone to take the Saints defense seriously 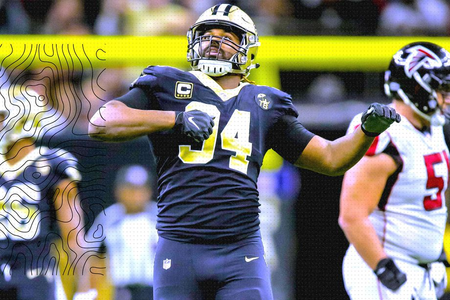 Anybody who has ever watched Cam Jordan play knows he’s a bully on the field. If you see him lined up across from you, you better make sure your chinstrap is buckled up tight because he is not with the frail sheet. Whether he’s playing the run or the pass, Jordan is like a grizzly bear out there, mauling guys, play after play after play.

At the same time, while he may often look like he is playing out of control, there is definitely a method to his madness. For as physical as Jordan plays down in and down out, his technique is also some of the best you will see from any edge rusher. When it comes to using his hands to control would be blockers and/or to escape off of blocks, there are few if any better than Jordan in the league right now.

He’s so powerful that he could just run through people all game long, if he wanted to, but it would be a huge mistake to see him as just some kinda goon. In addition to all the manhandling, Jordan manages to mix in some finesse, and he is just as effective running around blockers as he is running over them. He’s surprisingly quick and agile for a man his size, and maybe most importantly, he just understands how to play football.

You won’t see Jordan out there trying to reinvent the wheel when it comes to making plays. He is just going to wear you out and wear you down until you make even the slightest mistake. Then he takes that little mistake and exploits it to make you look stupid. ...