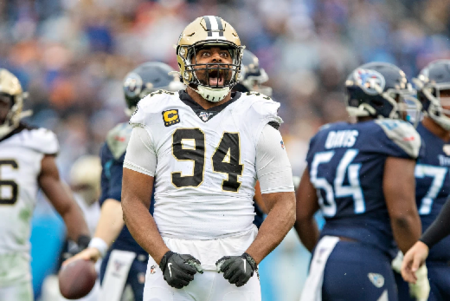 Cameron Jordan is quite the personality, guys, with the New Orleans Saints‘ five-time Pro Bowler known to speak his mind and put himself out there for the good of the people. Not only have we seen that over the years from interviews that the defensive end has done, but also when he served as a sideline reporter for XFL games earlier this year, showing his dynamic range of abilities.

Like most entertaining athletes, if you put a microphone in front of Cameron Jordan, the dude won’t be shy with what he’s going to say. So it shouldn’t come as too big of a surprise that the behemoth of a man let loose when talking about NFL quarterbacks he’d least like to be quarantined with right now, going in on all the guys he’s used to sacking in the backfield. But the signal-caller who got the most heat form Jordan? Sam Darnold of the New York Jets.

As a recent guest on The Adam Lefkoe Show, Cam revealed which signal-callers he’d find most annoying to be stuck indoors with right now during the pandemic, and the reasons for why he chose them. Most of the explanations were pretty fair, but Jordan said it was Darnold’s “punchable face” that led him to snag the No. 1 spot on his list. Take a look below at the defender’s hilarious explanations.